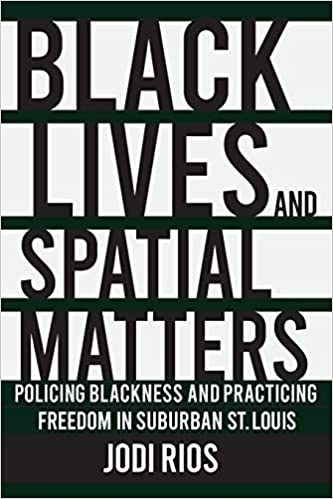 “because white men can’t/police their imagination/black men are dying,” wrote poet Claudia Rankine in 2014, the same year 18-year-old Michael Brown was killed by white police officer Darren Wilson in Ferguson, Missouri. Wilson later testified that to him, Brown resembled a “demon” during the moments that the police officer shot at the unarmed teen 12 times, ultimately hitting Brown with 6 bullets. Brown had already fallen to his knees by the time Wilson fired the fatal shots. Afterward, Ferguson police officers left Brown’s body uncovered in the street for hours. Brown’s killing ignited a local, national, and global movement for racial justice and freedom.

In Black Lives and Spatial Matters, Jodi Rios attends meticulously to the local: the long historical roots, shifting ideologies, and ongoing, localized state practices that created the conditions for Brown’s fatal encounter with Wilson, as well as the knowledges and practices of “Blackness-as-freedom” that both already existed and emerged from the same. Throughout the book, Rios aims to articulate the spatial dimensions of the “imagination” of which Rankine writes; and in particular, how the terms “urban” and “suburban” function in tandem with race as biopolitical markers of value and risk, of life-to-be-protected or increased “vulnerability to premature death” (Gilmore, 2002, p. 261).

In Part I, “Blackness as Risk,” which constitutes the majority of the book, Rios first lays out her theoretical framework and, in the second chapter, puts forth the longer racial and colonial, settler state prehistories of the contemporary moment in the St. Louis region. The latter convincingly traces the fragmented geographies, governance, and cultural norms of St. Louis County today back to French and Spanish colonial regimes and the US territorial era, in which settler colonial expansion collided with national debates over slavery and Black personhood under the law. These imperial and colonial histories created lasting land regimes as well as ideologies of race and property that continue to shape everyday life today. Rios then lays out the geography of North County, which is majority Black and consists of 46 municipalities located within only 50 square miles, of which “twenty-five can be found within a twelve-square-mile area known as the Normandy suburbs” (p. 79).

The following three chapters detail the daily, lived forms of surveillance and policing endured by Black residents of North St. Louis County. Together, they offer a systematic detailing of municipal practices, finances, and politics coupled with analysis of how spatial ideologies work together to reify race as embodied and fateful. In Chapter Three, “Racial States and Local Governance,” Rios elaborates “how municipal governments are critical instruments in the remaking of the modern racial state” (p. 2). Looking at a period of 10 years, Rios found that cities in North St. Louis County derived a large proportion of their municipal revenue from court fines and fees for minor, traffic and property-related infractions to the degree that many were dependent on such practices to remain financially solvent. Most cities averaged more than one citation per resident per year, and some issued as many as 10 citations per resident per year (p. 91). Further, Rios found that the higher the percentage of Black residents, the higher the proportion of the budget was derived from fines and fees (p. 91).

Such practices rested on the particular focus of Chapter Four: how “specific deployments of the suburban imaginary – producing respectable middle-class citizens, protecting private property, and upholding the aesthetic and cultural norms of suburban space” (pp. 111–12) are central to the logics, practices, and justifications for municipal policing. Through interviews with both officials and residents, Rios demonstrates how the term “suburban” is flexibly and repeatedly used as a marker of whiteness and justification for criminalization, or the reification of the “out of place-ness” of, Black residents. Such value judgments, embedded in notions of space and bodies, then normalize abandonment and vulnerability to harm – what Rios refers to as “Blackness as risk,” the inverse of Cheryl Harris’s well-known characterization of “whiteness as property.”

Importantly, Rios then argues, Blackness as risk cannot be remedied by representation. In Chapter Five, the book addresses the rise of Black female leadership in the region, and specifically in the city of Pagedale, which in 1982 became the first city in the United States to elect an all-Black, all-female leadership. Rios points out that Black female leadership has consistently been attacked and vilified and that Black-led cities are subject to increased levels of poaching of municipal resources that have led to higher rates of reliance on fines and fees. Representation in and of itself has brought no relief to most Black residents – in fact, many Black leaders in the region actively assert racialized respectability politics that perpetuate and even exacerbate predatory policing practices. Here, Rios’ findings complicate the dominant narrative that emerged from Ferguson: that white leadership and an overwhelmingly white police force exploited and harmed Black residents. Indeed, Ferguson was not even the worst offender but part of a particular kind of systemic, regional racial regime that cannot be reduced to identitarian logics.

In the second, shorter section of the book, “Blackness as Freedom,” Rios turns to the protests that emerged in the wake of Michael Brown’s killing and what she describes as “the extreme practices of freedom that emerged from this place” (p. 166). While qualifying that “it is not my story to tell” (but presumably trying to meet the challenge from those she interviewed to “get it right” (p. viii)), Rios argues that Black women and queer people of color were “the unequivocal leaders of resistance” (p. 166). While such intersectional positionalities have been centered in the larger Black Lives Matter movement as well as longer activist traditions of Black and queer-of-color feminism, Rios attends to how such leadership and politics in this moment emerged specifically out of North St Louis County and how it was informed by everyday, place-specific, and embodied experiences of racialized risk and harm. In the final chapter, Rios draws again from ethnographic interviews to attend to connections and fissures within and between St. Louis-based activists and outside organizations who came in the wake of Brown’s death.

Overall, in Black Lives and Spatial Matters, Rios has crafted a significant contribution to urban and suburban studies, geography, and broader literatures on Blackness, race, and space. The book makes explicit how suburban ideologies and their attendant social and spatial norms are inextricable from race and act as mechanisms for surveillance, punishment, and municipal profit. Such flexible signifiers of value disguise and justify organized abandonment and state-sanctioned racism. While offering a detailed structural analysis of everyday life and practices in the St. Louis region that cause widespread suffering and premature death for Black residents – and created the conditions for Michael Brown’s murder – Rios emphasizes that from these roots of oppression, Blackness as knowledge and praxis of freedom grows, too. Understanding the praxes of both oppression and liberation must be a multiscalar project – in this case, at the level of individual bodies and everyday life as governed by municipal and regional state apparatuses. Indeed, one of Rios’s most meaningful scholarly contributions is to show how intimate knowledge of urban planning and policy are key to unpacking everyday oppression as well as the roots of radical resistance.