Cities in the urban age: a dissent by Robert A. Beauregard 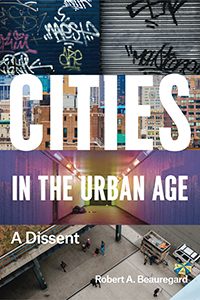 Cities in the urban age: a dissent is thematically big and intellectually stimulating. The prose are efficient, crisp, elegant, honest and clear – all hallmarks of the kind of style we typically associate with Robert Beauregard’s extensive contributions to urban studies over decades of scholarship. Not unlike David Harvey or Richard Sennett, who also write effectively for both specialists and generalists, Beauregard addresses signature topics that are enjoyable to read. That counts for something.

This book is really about the first great question in urban studies. What is a city exactly, and what can we reasonably expect the city to do for us (and other species)? Sadly, we don’t really have an agreed answer. Geomorphologists know what a glacier is, but urbanists are unsure where, when and how the first true cities even emerged: Uruk … or maybe Catal Huyuk?; they are unsure whether cities in this “urban age” are best conceptualized as places or processes; as images or functions; as material forms or political territories; as social linkages or post-human assemblages. Saying a “city” is dense, specialized, stratified, brimming with strangers, bustling? A good start perhaps, but large parts of cities like Tacoma, Washington – which Beauregard calls a “real” city – are suburban in form, feeling and function. That is not a problem, though, because he seems willing to stretch the (suburbanized) city to “the metropolitan region.” A good thing, otherwise what would we do with Mesa, Arizona or Surrey, British Columbia (both of which are demographically far larger than New Orleans, no doubt a “real” city)?

Stretching has its limits. He is more uncomfortable than I am, for instance, with the city of planetary urbanization. Jenny Robinson thinks cities are “made in and through different kinds of networks stretching far beyond the physical extent of the city” (p 5), which is less “vague” to me than it is to him. Beauregard respectfully dissents from such views, suggesting throughout Chapter 1 that we need an “urban” distinct from a “non-urban” – a core Chicago of felt skylines from a commodified Iowa of industrialized agriculture, despite their many interrelations – even as he does not actually aim to resolve these ambiguities and uncertainties in this book. Indeed, he embraces them, questioning the value of definitional “precision” in an era when advanced computational powers (once again) dangle the temptation that ubiquitous digitization means sharper insights. “We do not want to adopt the position that the whole world is urban,” he argues, “but neither do we want to dismiss how cities have come to effect the country itself as well as places much further away” (p 13).

The city, chapter 1 concludes, is “elusive,” “mysterious,” “complex” and “ever-restless” – but fundamentally something socio-spatial and imaginative that “harbors contradictions” (p 15). That is his main contribution here. As he puts it, contradictions are “opposing tendencies” that do not balance with one another over time nor cancel each other out – a proposition he thinks contemporary celebrants of the city as a global solution or human achievement fail to emphasize these days. For him, contradictions are unavoidable. They appear contingently in particular places. Most importantly for his argument – his dissent – they “cannot be eliminated” (ibid.). Chapter 2, 3, 4 and 5, respectively, are the crisp, elegant, clear and interesting treatments of what he considers the four most important contradictions.

Chapter 2 focuses on cities as places of both “wealth” and “poverty,” while Chapter 3 explores cities as concomitantly “destructive” and “sustainable.” Chapter 4 discusses the role of cities in fostering “oligarchic” forms of political power no less than “democratic” routines and rituals. Chapter 5 reminds us that cities are simultaneously “tolerant” and “intolerant” – cultural spaces that often nurture cosmopolitan sensibilities and new types of subject formation, but also zones that can and do oppress diverse identities and erase ways of being. At least one of these four chapters will attract the close attention of most anyone who reads Urban Geography. Are cities wealth creators? Sustainable? Democratic? Tolerant? Yes – and no. Don’t forget their “opposing tendencies.” They also impoverish, destroy, oppress and negate. The music of his prose moves along by shifting between minor and major keys – between lighter and darker tones – as we are reminded in a dichromatic rhythm of the complexities co-shaping actually-existing forms of urbanization and city-remaking. Brightness follows dissonance, sometimes in the same sentence, as he provides practical (mostly American) examples of the various ways in which the “fact and feeling” of cities nurture these key contradictions.

Late in his career, the political theorist of democracy, Ben Barber (2013), argued passionately that cities, or at least urban polities with skilled leadership, could solve our scariest global problems going forward and that in consequence mayors (of big cities) like New York, London, Tel Aviv and Barcelona through transnational networked agency should “rule the world.” Rather than rescaling our collective politics downwards (and outwards) from “dysfunctional” nations, Beauregard places more hope in our capacity to “encounter” a given city’s key contradictions. Chapter 6 concludes the book around the synoptic theme of “living with others,” suggesting in particular why “thinking about cities as a Petri dish of contradictions matters” (p. 164). Here he wants us to explore how the contradictions of cities in an urban age intertwine in loco and how, as both political and moral actors, we might usefully react to their specific (im)materialities of injustice and decay in our own communities. Knowing what cities really “are” theoretically – spaces of contradiction – might help us to know what to “do” practically in our many concrete places of action: transit charrettes, neighborhoods councils, union halls.

Is that enough? I think so, but urban books by social scientists should be read dialectically with and through other kinds of disciplinary work, including empirical studies by historians on particular cities. In the classroom, pair Cities in an Urban Age with the best local history you can find – and see if students can apply Beauregard’s synoptic contradictions to more familiar urban stories.