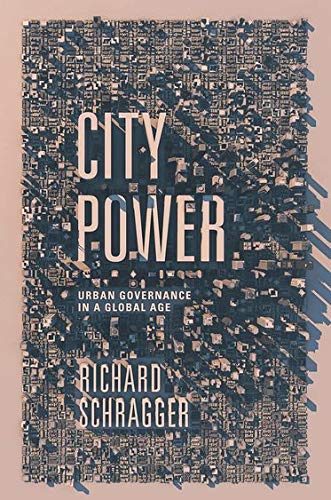 Urban scholars have long grappled with the argument that “urban governance” is an oxymoron – that cities cannot govern and that urban policy merely reflects external economic and political forces. A corollary to that argument holds that local policymakers are structurally compelled to adopt growth-oriented development agendas and avoid redistributive ones. Legal academic Richard Schragger weighs in on this debate at a propitious time, when local governments are testing the limits of city agency by trying to pursue policies beyond their traditional governance arenas and occasionally in contravention of federal or state law.

Schragger organizes his argument around the question of city power and arrives at conclusions that cut in opposite directions. He maintains, on the one hand, that local governments have far less power to attract or retain capital than proponents of corporate subsides would assume. But, on the other hand, he see this limitation as empowering in that it frees cities to govern without fear of being penalized by capital flight. In this telling, the true constraints on city power are not economic, but political and therefore subject to renegotiation. This affords Schragger room to make a case for the invigoration of municipal governance on the basis of its relative advantages as a platform for democratic participation.

The author grounds his descriptive analysis of city power on a conceptualization of cities that splits the difference between structure and agency, and that emphasizes the complexity and contingencies of urban processes. This formulation serves as a corrective to two predominant urban imaginaries in urban scholarship and policymaking, that of the city as a by-product determined by structural forces, and that of the city as a product that can be enhanced in order to lure capital. Schragger’s conceptualization also provides a theoretical opening for challenging prevailing understandings of the structural relations that limit city agency.

The case against economic structural constraints begins with considerable empirical evidence marshaled against the causal connection between economic development and urban policy. By thus dislodging a key pillar of the logic driving inter-city competition for capital, Schragger casts the attendant economic constraints on cities as fictitious – real only insofar as they become self-fulfilling to governments that accept them as fact. He contrasts these limitations to the very real political structures that inhibit cities’ governing capacity. The ensuing discussion centers on two dimensions of US-style, state-based federalism: vertical and horizontal federalism. Vertical federalism refers to the formal division among levels of government – an arrangement that produces a significant degree of legal autonomy for cities, but at the expense of political influence. This lack of influence results from several factors. On the one hand, urban policy decisions are vulnerable to preemption by state and federal law. On the other, the formal separation of governing power means that state and federal policymakers do not need to curry the support of their local counterparts in order to govern and may indeed find themselves in competition with them for political credit before the selfsame constituencies.

Horizontal federalism refers to the interaction between sub-federal jurisdictions. Schragger focuses on one aspect of this interaction – local governments’ use of jurisdictional borders, first, to offload costs associated with disadvantaged residents and burdensome uses, and, second, to attract and retain capital and affluent, high-skilled residents. As a general principle, the disruption of trade and residential mobility at a sub-federal level is illegal. This proscription, however, has been unevenly applied at a municipal level. Courts have, for instance, typically refused to strike down facially neutral zoning ordinances, despite whatever exclusionary effect they might have on indigent individuals. They have also been loath to restrict municipal attempts to attract businesses though state subsidies, even though these represent a clear interference with sub-federal trade. Schragger casts the selective enforcement of the prohibition against obstructing sub-federal mobility as a political choice – as opposed to an economic “reality” – that has allowed and even encouraged inter-urban competition and the manipulation of jurisdictional borders in ways that favor mobile capital and reinforces inequality across municipalities.

Notwithstanding the above fictitious and real constraints on urban governance, cities have demonstrated a greater capacity for adopting progressive and redistributive measures than dominant accounts of city power anticipate. Examples include the ratification of living wage ordinances in numerous cities and the use of the land use approval process to demand concessions from employers and developers. Beyond the confines of formal policymaking, these also comprise community benefit agreements and the formation of trans-local advocacy networks that match the scale of mobile corporate actors. Such strategies constitute further evidence of political agency at a local level and a further rebuttal of theories that call into question the relevance of urban politics. They are not, however, without considerable limitations, leading Schragger to conclude that, in the end, the empowerment of cities will require a repoliticization of the choices that underlie actual constraints on urban governance.

In short, City Power offers a persuasive case against local governing strategies premised on the capacity of urban policy to influence economic growth. Accordingly, the author calls for epistemological modesty in the evaluation of local economic development policy – an appeal that makes eminent sense, given the intricate relation between governing processes and the dynamics of economic activity. At times, however, Schragger oversells his case for modesty. It is one thing to regard the relation between policy and economic growth as complex, as he does; it is quite another to regard it as random, as he also does (p 213). One need not look far to find counterexamples of policy changes that have had predictable effects on economic investment (consider, for instance, the rush to build that preceded in New York City the expiration of its 421a tax exemption program). Nor does the author’s historical evidence, in the absence of counterfactuals, foreclose the possibility that local government efforts might have mitigated disinvestment or promoted investment that might otherwise not have happened. Schragger is indeed correct in observing that the multiple and interrelated factors that led to post-war urban decline and to recent urban recoveries went far beyond urban policy decisions. But that does not mean that such decisions did not play a contributing (if occasionally perhaps unwitting) role in the matter (see Beauregard, 2006; Sugrue, 2005). Therefore, while the contingent nature of economic development may well compel greater deference to uncertainty and attention to the particularity of local context, it does not repudiate altogether, as Schragger would have, local economic development as a legitimate and, under propitious circumstances, viable policy pursuit.

The tendency of City Power’s conclusions and recommendations to occasionally exceed the reach of its evidence does little to detract from the substantial merits of this work. The author effectively draws together a range of scholarly debates on urban governance, economic development, and the relation between the two, and builds upon them to successfully challenge pervasive narratives concerning the constraints on city power. As such, the book would serve as apt material for classes on urban government, urban economics, and urban redevelopment. It would also offer a valuable resource for political actors deliberating over the relative merits of redistributive policy and corporate subsidies.