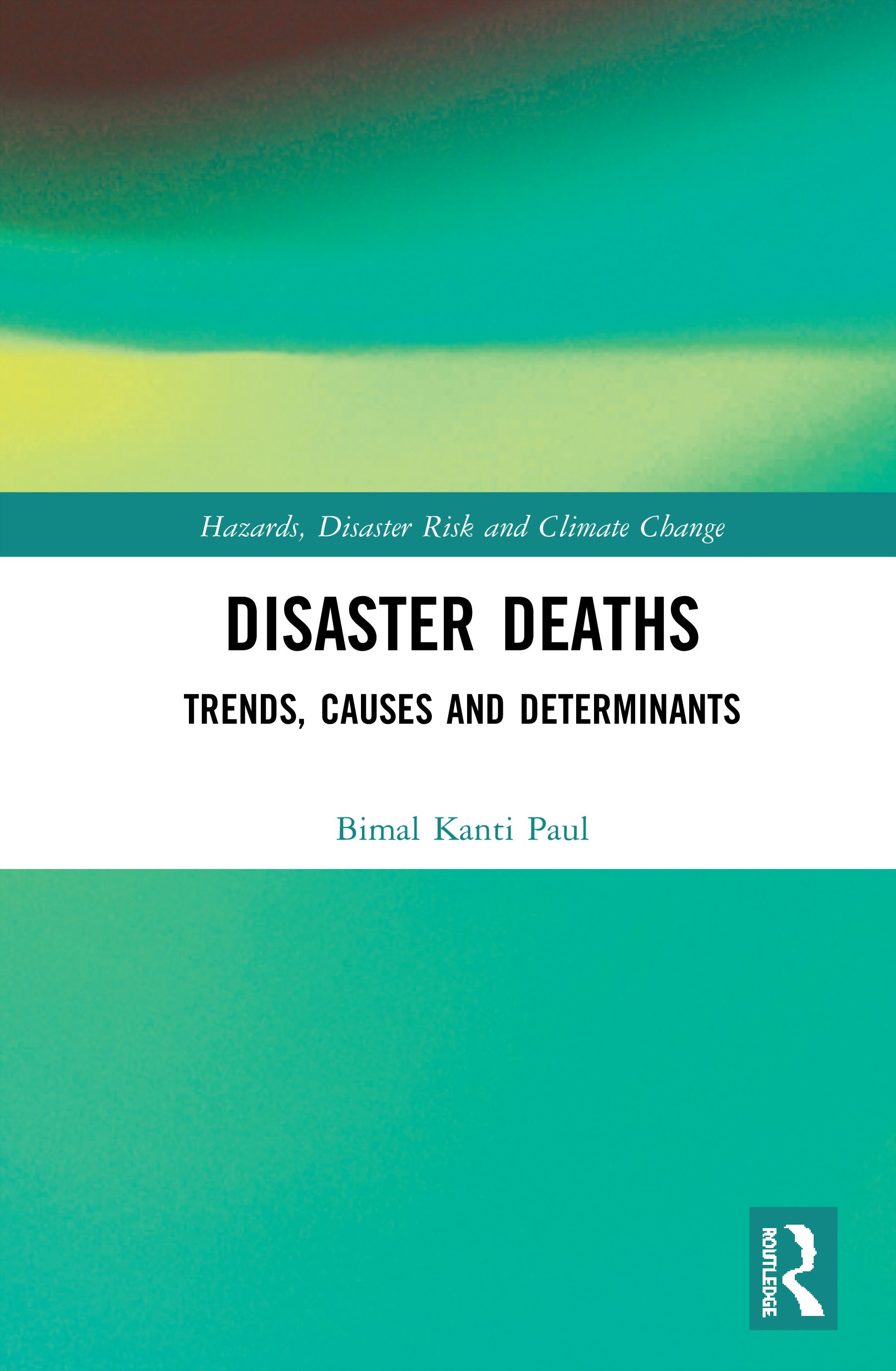 Disaster deaths: Trends, causes and determinants, by Bimal Kanti Paul, demonstrates the scenario of disaster deaths in a comprehensive way, providing in-depth analysis of the determinants, trends and commonalities across all disasters and explaining specific ways to reduce mortality from specific events.

The book consists of six sections. The first section provides an overview and introduction, while the second section investigates the causes of unexpected death toll numbers caused by 15 natural disasters. The third section examines 20 disaster-related death trends over a 25-year period (1991–2015), followed by an exploration of disaster-specific circumstances and causes. The fith section discusses how both hazards and vulnerable factors appear as important determinants of natural disaster deaths. The final section concludes with a summary of the book’s main findings and consideration of ways to reduce deaths caused by future extreme events.

A central aim of this book is to help readers understand the complexities of deaths caused by natural disasters. The author argues that natural disasters are commonly conceived of as adverse extreme natural events that have negative effects on humans and the environment; however, disasters cannot be considered so if they do not negatively impact people or significantly disrupt the day-to-day functioning of a community. People not only have the ability to amplify these negative effects, but they are also responsible, to a greater or lesser extent, for causing such damaging events through their actions. The book discusses the challenges and problems associated with this fact, explaining how disaster deaths differ by gender, socio-economic condition, age, ethnicity, place of residence, race, immigration and disability status.

Investigation focuses on the possible reasons why some disasters resulted in an unusually high number of fatalities while others resulted in a surprisingly low number of fatalities, emphasizing the physical characteristics of specific disasters, as well as public-sector preparedness and mitigation efforts to reduce deaths. For example, the world’s largest earthquake and tsunami, measuring 9.5 on the Richter Scale, struck Chile on 22 May 1960, but it did not result in the highest death toll, killing only 5,700 people. This is due to a large foreshock that struck only 30 minutes before the main event, causing many people to flee their homes and save them from the main shock. In contrast, the Haiyuan earthquake, measuring 7.8 on the Richter scale, struck rural northern China on 16 December 1920, killing 270,000 people. The collapse of cave dwellings was the primary cause of the extremely high death toll, demonstrating the significance of site-specific characteristics.

Additional factors influencing the number of deaths – like magnitude, intensity, duration, and spatial extent – are also taken up in this book, examining the levels and trends of disaster-related deaths to determine whether they have decreased or increased in recent decades across all disaster types and geographical scales. The trends in disaster mortality are examined using a quantitative approach, highlighting the efforts of some countries to reduce disaster deaths in the last three decades by implementing numerous preparedness and mitigation measures. The book discusses disaster types such as earthquakes, tsunamis, droughts, floods, cyclones, hurricanes, typhoons, tornadoes, lightning, heat waves, ice and snow storms, and volcanoes with examples from countries like China, Bangladesh, Chile, Haiti, Myanmar, Philippines and USA. It analyses the causes and circumstances of disaster-related human deaths and reveals that a large proportion of these fatalities are largely avoidable by improving cyclone, tsunami, and flood forecasting and warning systems, as well as evacuation and sheltering measures, which is the central argument of the book.

A key contribution of the book is the investigation of critical determinants of disaster deaths, yielding valuable information about areas where outreach, mitigation, and prevention can be implemented to help reduce the loss of life, for example, during cyclones on the eastern coast of Bangladesh. This type of information is critical for implementing appropriate preparedness and mitigation measures to reduce the level of mortality from extreme events. For example, in drought-affected areas, there is a need to establish food subsidy programs, or to initiate food distribution to the poor, or to install low-flow faucet aerators to reduce water use while maintaining proper hygiene. In other locations, there may be a need for enforcement of the latest building codes for new buildings and retrofit existing ones with financial support from the government and international agencies, or a need to manage flood risks through better flood preparedness like introduction of swimming lessons in school curricula. These disaster-specific recommendations are an important contribution of the book to enrich the existing literature.

Because of the significant loss of life caused by natural disasters, studies on the extent, cause, timing, circumstance, and determinants of disaster mortality are available. However, the majority of these studies focus on a single year, a single country, or a single type of extreme event. There has not been a thorough examination of the deaths caused by natural disasters, and the gap has been filled by this book. Furthermore, no attempt has been made in the literature to review and summarize the plethora of disaster-related deaths. There is currently no book or other type of publication that treats disaster deaths holistically (i.e. on different scales, either global or national) by individual and also by all types of disaster combined for single or multiple years. This book presents disaster deaths in an integrative manner, for example, by drawing on perspectives from public health, social science, and medicine. Such perspectives are urgently required to assist in the development of a protocol to prevent further disaster deaths.

Disaster deaths is well-researched, informative, analytical and explanatory in nature. It enables readers to understand the nature of disasters while also helping them to mitigate different types of disasters and improve future results. It makes a strong contribution to the literature on natural disasters.