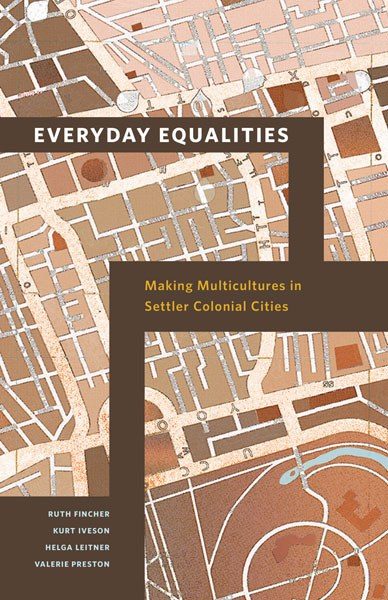 The central question propelling this book project is becoming more urgent by the day: what does equality look like in everyday urban settings? As the authors acknowledge, the effort to find evidence of, and to develop a conceptual framework around, the experiences, atmospheres, institutions, and infrastructures that support and represent egalitarian formations is fraught with theoretical, methodological, and political difficulties. The book’s scope encompasses four major metropolitan regions of the Global North and includes scales of analysis from the personal to the global and processes ranging from the cultural to the economic. While this approach offers a unique contribution to the field, it also presents a challenge to readers’ agility in having to quickly jump from topic to topic. The result, however, of these four leading critical and curious urban geographers examining their own cities, analyzing an extensive number of place-based ethnographic case studies, and engaging in dialogue with each other, is a model of collaborative scholarship that will stand the test of time. More urgently, Everyday Equalities matches the moment and is relevant for geographers, social scientists in general, activists, students, and those interested in charting more progressive new directions for communities through research, organizing, and policymaking.

The notion of encounter is at the center of the inquiry and is used to organize the project’s ontology, epistemology, and methodology by drawing on the work of Judith Butler, Nancy Fraser, Irving Goffman, Stuart Hall, Doreen Massey, Jacques Rancière, Georg Simmel, and Iris Marion Young, among others. Following recent scholarship, the conventional understanding of encounter in public space is resituated to encompass a spectrum of interactions that represent the multisited and multitemporal character of encounters. A surprising reexamination of influential psychologist Gordon Allport’s thoughts on the conditions necessary for intergroup contact to lead to reduced prejudice and discrimination shows the creative and extensive framework crafted by the authors for their task; a framework enabling the comparative analysis of a wide range of settings, intergroup relations, and political actions in relationship with forms of equality and processes of racialization in multi-cultural urban areas.

The three main research questions, which are mutually constitutive, are how encounters with difference vary across daily life spheres, temporalities, and spatialities. The empirical analysis then centers on the authors’ home cities of Los Angeles, Melbourne, Sydney, and Toronto. The racial and immigration geographies receive uneven treatment, yet the chapters do include a succinct and thoughtful overview of a significant theme in each area’s urban geography. The overviews would be useful as student readings and starting points for research on related topics. For instance, the complexities and contradictions of Los Angeles’s history as a place of both multicultural cooperation and racial violence is chronicled. Readers learn about Melbourne’s housing patterns from the inner-city to the suburbs and how these structure immigrant population distributions as well as the particular dynamics in the highly diverse community of Dandenong. Sydney’s public transportation infrastructure geography is outlined as a way to see the patterns of immigrant settlement and the places of intersection with white hostility, such as Cronulla, the site of a racially motivated conflict over access to a public beach in 2005. The racial and ethnic heterogeneity of Toronto’s workplaces is highlighted in the hotel, grocery, and caregiving industries and this is related to the wider metropolitan trend of growing income inequality.

The search for examples and features of being together in difference as equals takes up the bulk of the book’s contents. More than a dozen case studies are examined. Readers will gain an understanding of the bonds felt by neighbors who shared a sense of estrangement from society at large, the empowerment experienced by hotel room attendants participating in a union-organized community choir, the shared political purposes of low-income bus riders advocating against increased fares, and the common learnings that have come through discussions of racism by people of various races and ethnicities at worker centers. The strength of the work is in the careful enumeration of the encounters with difference within and across social groups and how these are shaped by stratifications, institutions, and infrastructures. The descriptions and critiques of the sociospatial processes and patterns are models of critical urban geography.

The authors, though, give less attention to connecting their theoretical framework on equality to the everyday experiences. Therefore, being together as equals is an under-developed part of their argument. The problem is, in part, from the reliance on existing ethnographies to answer an additional set of questions around how equality manifests in encounters. As the authors note, for instance, regarding the otherwise fascinating case study of an Australian anti-racism educational campaign on a regional bus network, analyzing the content of the media interventions is not sufficient for understanding impact. Neither anecdotes nor opinion data were offered to support how this campaign supported being together in difference as equals before moving on to another case study. Nevertheless, the value of the work is in how it points in a productive direction and beckons toward further original praxis-oriented research within the conceptual framework.

Scholarly readers will appreciate that Everyday Equalities is not an edited volume; the book is written in a collective voice. Those familiar with the work of the four authors individually will notice paragraphs where one exerts more influence; however, this is not to the point of compromising their one voice, which speaks clearly in the most important sections such as the conclusion. The conclusion is written around six propositions to guide the hard work required to enact a politics of equality, briefly: transgressing modes of domination, learning ethical commitments, organizing new infrastructures, listening with codes of conduct, recognizing time-scales of encounter, and rethinking spatialities of material structures. These insightful propositions attest to the value of intensive collaboration. Indeed, it is the greatest strength of Everyday Equalities, and serves as an important lesson about the scholarship needed to respond to the intricate and entangled forces moving in, and interactions making up, contemporary everyday life and society that hopefully serves as inspiration and motivation for future work.