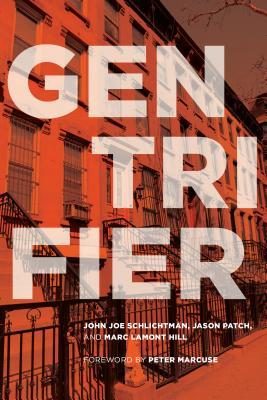 Years ago in a community studies seminar, urban ethnographer Bill Kornblum challenged my overly exacting critique of gentrifiers by pointing out that the contradictions of capital often compel people – even witting sociologists – to make crass decisions. In doing so, he was encouraging me to engage in greater reflexivity. In Gentrifier, John Joe Schlichtman, Jason Patch, and Marc Lamont Hill similarly invite readers to interrogate their place in the narrative of gentrification.

What is a gentrifier? According to Schlichtman, Patch, and Hill, a “‘gentrifier’. . . is a structural position enacted when particular personal choices coincide with particular structural tendencies – tendencies that are embedded in accumulations of neighborhood injustices and in contemporary global capitalism” (p. 187). To examine the role of gentrifiers in processes of urban change, they provide us with several analytic devices grounded in autoethnographic accounts and the extant gentrification literature. This toolkit enables the reader to situate their own experience in larger structural processes.

In Chapter One, they introduce an “analytic multi-tool” to explore how people make agentic residential choices in light of individual resources and social, cultural, and economic conditions. The multi-tool consists of seven considerations: monetary, practical, aesthetic, amenity, community, cultural authenticity, and flexibility (p. 28). They use this tool to analyze their personal residential choices in Chapter Two.

As the authors shifted from graduate student to young professional to middle-class parent, their priorities changed as did the constraints they faced and choices they made. For Schlichtman, a native of Chicago’s White ethnic working-class suburbs, living in a brownstone converted to single-room occupancy in the historically Black neighborhood of Fort Greene, Brooklyn provided an affordable place to sleep not far from graduate school. Years later, he and his Black Caribbean Brooklynite wife chose to live in a condominium in the redeveloped formerly industrial West Loop, Chicago area instead of the predominantly Black South Side to provide their daughters with access to better schools and playgrounds. As a newly minted professor, Hill bought a home in East Germantown, a marginal, slowly gentrifying, predominantly Black neighborhood in his hometown of Philadelphia. He viewed this purchase as an instance of “‘insider’ social mobility rather than ‘outsider’ colonization,” since he had spent part of his childhood in a rougher North Philadelphia neighborhood (p. 51). Once his media career took off, he sought a second home in an amenity-rich new development in Fort Greene, to balance his desire to be in a center of Black creative culture with his need for security and convenience given his growing celebrity and affluence. After living in Harlem and the low-income Latino community of Sunset Park, Brooklyn, Patch, a middle class Jewish transplant from Houston, and his wife, a Greek immigrant, felt comfortable in a moderately diverse, gentrifying historic Providence district replete with eclectic ethnic restaurants, tattooed waitresses, and an urban farm. In each case, the authors helped cement the gentrification of their neighborhoods, despite their diverse backgrounds and ethical opposition to the inequality gentrification reinforces.

Reflecting on their residential choices, they argue that individuals emphasize different considerations depending on their stage in the life-course and the level of gentrification they encounter. At the same time, these decisions are influenced by segregation, suburbanization, deindustrialization, urban public school disinvestment, real estate financialization, the expansion of the professional creative class, and other social forces. To contextualize individual choices in the framework of larger structural developments, the authors outline the wide array of historical devaluation and subsequent revalorization processes that take place at global, national, regional, metropolitan, and local levels to foster gentrification and economic, political, and social-cultural displacements in Chapter Three. This framework helps readers recognize the complex interplay between gentrification processes unfolding at various scales from the macro to the micro.

To address why and how different gentrifiers impact neighborhoods, the authors codify gentrifiers as conquerors, colonizers/connectors, consumers, competitors, capitalists, or curators based on their motivations in Chapter Four (p. 134). While this set of social types illuminates variation among gentrifiers, the authors are quick to acknowledge that grander structural conditions supersede the diverse aims and ethics implicit in this typology.

“Regardless of their motives or ‘type,’ all gentrifiers . . . are operating as . . . economic, social, and cultural power brokers within a space in which they are less rooted and upon which they are less dependent than their neighbors. . . . Such factors are an inevitable part of gentrification, both constituted and reinforced by the processes of late capitalism, growing inequality, and racial formation“. (Schlichtman, Patch, and Hill, 2017, p. 171)

What can gentrifiers do to promote more just and fair communities? The authors reject a celebratory neoliberal position or an ameliorative approach that attempts to mitigate some of the attendant social problems while accepting gentrification as an inexorable marketdriven development. Instead, they invoke urban planning scholar Peter Marcuse and cultural thinker Wendell Berry in Chapter Five to advocate for a nurturing transformative vision that seeks to control and limit gentrification through community-based democratic processes that prioritize the greater social good.

Throughout the book, the authors grapple with ethical dilemmas as their political views and social scientific training come up against real, impactful, personal choices, like where to raise or educate their children. These dilemmas are particularly acute when they address the intersection of race and class, highlighting the unique challenges middle class people of color and mixed-race families face. For example, given the role of homeownership in wealth accumulation, the history of residential segregation and redlining, and persistent socioeconomic inequality between races, should Black homeowners in appreciating areas be expected to reject generous purchase offers to slow gentrification? Should mixed-race families forego moving into Black or Latino areas at the cost of exposing their children to greater discrimination, because the White family members may inadvertently foster gentrification? Is it a display of privilege or justice-seeking when itinerant graduate students protest community leaders’ collaboration with real estate developers and city officials to garner resources for marginalized neighborhoods of color?

In lieu of firm answers, the authors offer provocations, pointing out contradictions, paradoxes, and complexities. They never adopt a singular position on gentrification. Rather, they highlight the pragmatism driving individual choices while promoting progressive efforts. They advocate for empowering communities, building coalitions, and giving people of all classes and races residential choice; yet, they also recognize that the resources necessary for such decision-making are not equally distributed across classes and races. At times, the tightrope they walk becomes tenuous. For example, when they argue that middleclass people have a right to the city, they momentarily overlook how exercising that right in lower-income areas displaces poorer people and impinges on their right to the city. Thus, the contradictions remain unresolved.

Nevertheless, Schlichtman, Patch, and Hill succeed in constructing a corrective to overly deterministic analyses by focusing on gentrifiers’ motivations, situations, agency, and relationship to structural conditions and social forces. The breezy writing style makes this volume appropriate for undergraduates, activists, and anyone else interested in starting thorny conversations about one’s own participation in gentrification.