Mean streets: homelessness, public space, and the limits of capital by Don Mitchell 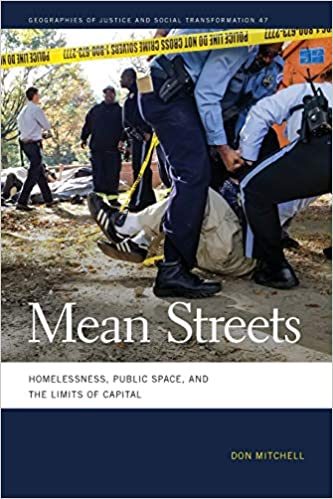 Mean Streets serves as an anthology of sorts of Don Mitchell’s journal articles and book chapters published between 2002 and 2017 on homelessness, public space, and the control of urban space for capital accumulation. Rather than a collection of reprints, Mitchell revises and updates these works and bases the book on thirty years of thinking about why homelessness is a normal feature of society.

The book presents a historical geography of the laws and practices that regulate and manage the presence of poor people in public space and is broken into two parts connected by an Interlude. The first part of the book consists of four chapters that lays out examples of homelessness as class struggle over who can be in urban spaces using historical examples from a variety of American cities and across various time periods starting in the early decades of the 20th century. The second part of the book contains three chapters that illustrate how systematic regulation of urban space transformed homelessness into a “metastasized” class struggle. The Interlude is used to transition from the historical examples of homeless and poor people’s experiences surviving on and battling for spaces on the streets to laws and court challenges since the 1990s that seek to regulate them and move them out of city spaces.

The case studies discussed in the first part effectively show how capitalism, across various historical moments, has created differences among urban citizens, namely those connected and unconnected to property. Mitchell employs a historical approach “always seeking to explain what happened, why it happened the way it did, and therefore what it meant at the time and what it means now” (p. xi). Examples illustrate the formation of these class distinctions within the logics of capitalism through discussions of American Skid Rows (Chapter 1), the Industrial Workers of the World (IWW)’s street speaking actions (Chapter 2), and tent cities in places as diverse as Camden, Sacramento, and St. Petersburg, FL (Chapter 3). Chapter 4 extends the conversation to the contemporary survival struggles of non-propertied classes, who in addition to facing the housing and food insecurity created by the normal operation of capitalism, must also contend with increased surveillance of urban space, innovations in trespass law and its enforcement through banishment, and criminalization of charitable intervention (e.g. barring people from giving away food to homeless individuals in public spaces).

The second part of the book focuses on how homelessness and mean streets are metastasizing throughout American cities. The deliberate use of the word “metastasize” invokes cancer or the spreading and growing throughout urban areas. While a baseline interpretation of the use of this word suggests that, indeed, homelessness and its impact on the regulation of public spaces of American cities is pervasive and increasing, Mitchell is arguing more than that. Cities’ approaches to regulating who can be in public spaces are expanding to exclude more and more people to form a larger class of “those who don’t belong” as deemed by authorities and property owners. This section of the book reads as a warning to us all: the legal mechanisms like trespass and banishment and the fear of uncontrollable spaces will soon mean that more and more of us are targets for removal from public spaces and by extension, new entrants to the class of people treated as the urban homeless are treated. This warning is conveyed primarily through analysis of the events and logics presented through several court decisions: Hill v. Colorado 2000 (Chapter 5) and Virginia v. Hicks 2003 (Chapter 6) and in debates surrounding proposed city council ordinances such as the failed attempt at prohibiting “strangers” from alleys in Minneapolis in 2006 (Chapters 4, 7).

The empirical cases presented throughout Mean Streets are very compelling. Readers already familiar with Mitchell’s work will likely find the updated sections and his synthesis interesting and helpful for understanding his contributions to the wider geographic literature. Nonetheless, Mitchell’s attempts to explicate the theoretical threads running through the chapters, particularly in the Interlude, while helpful, are not clearly visible across the cases. Mitchell admits this muddling himself in the Preface, attributing it to the nature of “deeply historical work and working through historical methods” and the “forces of real historical processes” complicating tightly woven theory (p. xiii). Graduate students and scholars new to Marxist theory and the criminalization of homelessness might find this book hard to digest for that very reason. It also raises the question of whether unraveling of the threads is more than a limitation of the methods, but rather an overstating of the connections among the various cases and the ways that they make up a coherent whole. Specifically, the threads warning of “mean streets” metastasizing is a prediction of an impending larger class war. The various case studies provide evidence demonstrating the spreading of the “mean streets” mentality, but also explain how its codification in laws and ordinances did not always come to pass or achieve consistent enforcement (e.g. the Minneapolis ordinance didn’t pass). This makes it harder to accept that the evidence overwhelmingly supports the narrative of “mean streets metastasized.”

Mitchell’s ability to analyze a tremendous amount of secondary research, newspaper reporting, legislation, and court cases to illustrate and support a Marxist critique of capitalism is remarkable. It must be satisfying for a researcher to have the opportunity to connect multiple distinct research projects and explicate the theoretical threads running through them. For the author and audience alike, Mean Streets is notable for providing a detailed Marxist explanation for why homelessness persists with supportive and engaging empirical examples. It is a welcome synthesis that successfully represents Mitchell’s sizable and insightful contributions to the literature on homelessness and control of urban spaces.