Migrants and city-making by Ayse Çağlar and Nina Glick Schiller 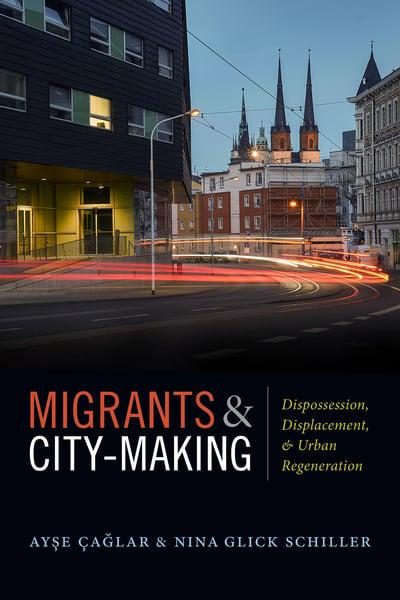 Ayşe Çaglar’s and Nina Glick Schiller’s book Migrants and City-making: Dispossession, Displacement, and Urban Regeneration explores relationships between migrants and cities as part of urban restructuring processes of three cities (Mardin, Turkey; Manchester, USA; and Halle, Germany). Based on comparative ethnographies of these disempowered cities between 2000 and 2016, the book explores city leaders’ and migrants’ participation in mutually constitutive processes of displacement and emplacement, contributing to the reshaping and repositioning of their cities. Çağlar and Glick Schiller argue that migrants – together with non-migrants – play active roles in multiscalar city-making processes while trying to reconstruct their lives within dispossessory processes of capital accumulation, through several modes of emplacement such as entrepreneurship, everyday life sociabilities, and social citizenship.

In the introductory chapter, the authors provide the analytical framework as well as the key concepts and methods. “Multiscalar analysis” lies at the core of the book’s methodological toolbox which involves investigating “sociospatial spheres of practice that are constituted in relationship to each other and within various hierarchies of networks of power” (p. 8). With this approach, the authors provide an ethnographically informed critique of methodological nationalism and the ethnic lens (p. 3–5), which overemphasize the differences in national origin especially when analyzing migration-related social processes. “Emplacement” is another conceptual tool that strengthens the book’s analytical power to explicate the commonalities in experiences of migrants and non-migrants. It is defined as “the relationship between … the continuing restructuring of place within multiscalar networks of power and … a person’s efforts, within the barriers and opportunities that contingencies of local place-making offer, to build a life within networks of local, national, supranational, and global interconnections” (p. 21). The authors prefer this concept as an alternative to integration or assimilation since it better captures the shared experiences and struggles of migrants and natives to carve out a decent future while participating in and coping with transformations of space, place and relations of power over time. “Contemporaneity” is a third term which helps conceptualize migrants and non-migrants in the same temporal frame: “These actors must be understood as sharing the same time/space, although with unequal access to resources and power” (p. 21). By underlining the shared temporality of all city inhabitants, the book challenges the binary division between migrants and non-migrants, especially in relation to dispossessory processes of urban regeneration since they both try to build their lives within the same processes of displacement and emplacement.

Chapter 1 introduces Manchester, Halle, and Mardin, highlighting similarities among these seemingly different cities which also constitute the parameters of the book’s comparative-historical framework. The authors approach each city “not as a bounded unit but as a multiscalar social field of interconnection” (p. 35). The similarities are as follows: Urban leaders implemented urban regeneration agendas hoping that their city could regain some of its past significance and power within the neoliberal competition between cities and as such used public funding to attract private investment to improve their competitive position. However, restructuring processes increased economic and social disparities, promoting dispossession and displacement of urban residents. Although migrants and minorities were welcomed in pluralistic narratives of each city, neither migrants nor other ethnic communities benefited from city resources accordingly. However, through different forms of emplacement, migrants and minorities actively participate “within the multiscalar processes that constitute cities with different configurations of economic, political, and cultural power” (p. 15).

Chapters 2 through 5 provide ethnographically informed and comparative accounts of different forms of displacement and emplacement integral to city-making in the three cities: small migrant businesses in Halle (Chapter 2); daily sociabilities of the displaced urban residents within three types of sites, namely “proximal, workplace, and institutional” (p. 131) in Manchester (Chapter 3); social citizenship practices of born-again Christian migrants in Halle and Manchester (Chapter 4); and supranationally mediated place-making through the multiscalar emplacement of Syriac Christian minorities and returnees in Mardin (Chapter 5).

By exploring the changing relationship between migrants and cities over a period of 15 years, the authors provide a compelling critique of the ethnographic present (p. 212). They provide a strong example of conjunctural analysis which is able to capture “the reconfiguration of multiple institutions and networks of power at each historical conjuncture” (p. 13) and simultaneous relational constitution of scales of locality, region, nation-state, the supra-national, and the global. In a similar vein, the book also provides an excellent critique of methodological nationalism by illustrating how local, regional, national, and global networks of power are interconnected and mutually constitutive through ordinary people’s participation in these networks and effort to navigate their lives within the paradoxical nature of disempowered cities’ opportunities and constraints. In this regard, the multiscalar comparative analysis reveals how “conjunctural forces always involve multiple globe-spanning actors within intersected social fields of power” (p. 211).

By placing migrants and non-migrants in the same analytical framework, Çağlar and Glick Schiller show how “all residents of a place were imbricated in the processes that displaced them” (p. 210) and, therefore, had to seek emplacement of some sort. They underline how migrants, together with other urban residents, emerge as actors through their emplacements, negotiations, and struggles which play a vital role in the ongoing production of all places. The nuanced insights the book offers into the multifaceted and intersecting experiences of all urban residents provide a strong and ethnographically informed response to the polarizing and discriminatory discourses that set migrants against the wellbeing of natives, by highlighting their common lived experiences of dispossession and displacement within the ongoing multiscalar processes of capital accumulation. Hence, Çağlar and Glick Schiller underlie “the necessity for social justice movements that speak of common struggles and aspirations to confront changing configurations of power and the contradictions of violent force” (p. 93). In this regard, the authors suggest moving beyond concepts of urban citizenship and the right to the city which take cities as units of analysis. They call for a holistic approach to social justice claims and the empowerment of the dispossessed which should be mobilized around multiscalar “anticapitalist struggles that confront the global power of capital” (p. 225).

This book provides an inspiring example of theory production through long-term ethnographic study supported by a comparative analytical framework, reflective of the historical conditions that shape their theory. It not only challenges outdated methodologies, concepts, and units of analysis that have shaped contemporary literature on migration and urban restructuring but also prepares the ground for “further work on the relationship between historical conjuncture and theory production” (p. 215) by illustrating how to develop and employ conceptual tools that speak to the contingency of the conjunctural moment as well as to “theorize the temporal-spatial dimensions of their core concepts” (p. 216).

Based on “multisighted rather than multi-sited” research (p. 10), the book makes a strong contribution to both migration and urban studies in many aspects some of which were outlined above. It challenges disciplinary divisions between migration studies and urban studies which limit our understanding of global processes of city-making, drawing attention to both the agency of migrants in city-making and the role of neoliberal urban restructuring processes in different forms of mobility and displacement. Above all, it underscores “relationships that all of us, everywhere, have to the dispossessive and reconstitutive powers of contemporary capitalism” (p. 210). I highly recommend this book especially for those who work at the intersections of migration and urban studies and want to go beyond the national and ethnic lens.