Nairobi in the Making by Constance Smith 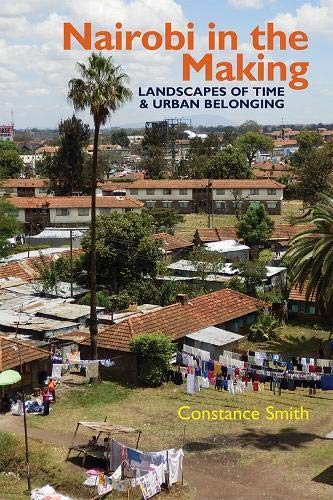 In 2006, Kenya promulgated a national long-term development strategy known as Vision 2030. Vision 2030’s stated ambition is to make Kenya a “globally competitive and prosperous nation” by the year 2030. A significant part of this vision is focused on the capital city, through the flagship project, Nairobi Metro 2030 that encompasses plans for building the satellite cities of Tatu and Konza techoncity also dubbed “Silicon Savannah”. In an apparent neoliberalization of the city, this process is driven by both government “master plans” and (promise of) global capital. The intention is to ultimately transform the city to a “World Class African Metropolis” in order to make it attractive to foreign investors and the local middle class. Constance Smith’s monograph, Nairobi in the Making: Landscapes of Time and Urban Belonging is a timely intervention that studies the city’s shifting landscape across the longue durée, considering how “the remains of the past and stuff of the present are entangled in contemporary Nairobi” (p. 22). Through the story of one of Nairobi’s oldest estates, Kaloleni, Smith carefully demonstrates how contemporary anxieties of Nairobians are shaped by the intertwined character of the colonial past and uncertain futures. To do so she foregrounds and privileges the people-centered “view from the street” (p. 36) as opposed to the “totalizing gaze” (p. 36) of government plans and cartography.

The approach is mainly ethnographic; involving a yearlong participant observation in Kaloleni between 2014 and 2015 as well as conducting life history interviews. This is further supplemented with archival research, secondary literature and analysis of (social) media. The choice of Kaloleni as a case study is informed by its unique colonial history and current disposition as a site of new development in the context of Vision 2030.

The book is organized into an introductory chapter, followed by two parts that comprise a set of three chapters each and a separate conclusion. Part One covers substantial ground as it looks back at the colonial roots and the post-independence remaking of the estate. The colonial origins, aims and management of the Kaloleni are discussed here based on written historical sources and life history interviews. In addition to nurturing subservient social and political subjectivities among Africans, Kaloleni also contrastingly became home to elite politicians who led the decolonization campaigns – both in the city and nationally.

The focus here is the multiple and dynamic practices through which this history is curated and instrumentalized to support contemporary claims. These range from acts of “performing property” (p. 96) to lay claims to the ownership of the estate to “forensic archiving” (p. 99) by residents as documentary evidence. The result is a bottom-up (re-)construction of a “minor history” (p. 96) that supports a plethora of claims in order to “ensure future belonging” (p. 108).

Kenyan independence in 1963 ushered in the process of “remapping of colonial order (p. 46)” in Kaloleni. This process manifested itself in the changing structure of the houses, demographics as well as deteriorating infrastructure. A condition the author attributes to the withdrawal of the previously omnipresent state in the management of the daily affairs of the estate. This lax in governance and management allowed new practices on the part of the residents. Among other things, there emerged temporary “extensions” (p. 51) to the houses which in turn allowed admission of a stream of new tenants into the estate. Gradually, there was also infrastructural breakdown and the accumulation of dirt and decay due to City Council’s “sheer abdication of responsibilities” (p. 60). Through a focus on affect, Smith demonstrates how this dirt and decay are rendered “meaningful in new ways” (p. 66) in the context of looming “erasure” (p. 55) by the Vision 2030 plans.

In Part two Smith looks at how external dynamics shape urban life in Nairobi. One angle to this is a focus on the “range of social, material and moral flows (p. 114)” across the urban-rural divide by taking into consideration connections to rural homes as wells as funerary practices. To do so, the author innovatively tracks down and speaks with members of a Kaloleni family that retired to their rural home in Western Kenya as well as participating in “matanga” (p. 115)-funerals- in Kaloleni itself. The second theme is that of the ways in which global discourses, planning and imagery are drawn on and discursively appropriated in Kaloleni. There is an interesting analysis of “scaling up (of) local crime in the language of terror” (p. 158) drawing on the reporting and discourse of terrorist attacks in Nairobi. More importantly, here, Smith also shows how Vision 2030 is predicated on global “circulating urban policies and architectural aesthetics” (p. 162). The “seductive imagery and utopian language” (p. 176) contained in Vision 2030 is innovatively appropriated by residents in the construction of a parallel “participatory temporality, a tempopolitical way of working on the future to bring it within reach” (p. 179).

The book’s overarching argument is that Kalolenians are “caught up in a meantime between promises of futurity and the remains of empire (p. 180).” Throughout the chapters Constance Smith demonstrates how residents’ discursive and material practices challenge the linearity of time and “predetermined future” (p. 179) inherent in the state-led urban planning.

One potentially productive question that this book did not ask is how Kaloleni became a Luo-majority enclave. It is mentioned only in passing much later in the book that “majority of Kalolenians are from the Luo ethnic group” (Chapter 4, p. 113). Perhaps an enquiry into the role of ethnicity in Nairobi’s urban demographic history might have further benefitted the research and maybe also justified the extensive focus on Luo ethnography. Apart from this oversight, Nairobi in the making is an incredibly rich and finely detailed and yet quite accessible ethnography. I hope it receives the wide readership it deserves among researchers and students of Anthropology and Urban Studies particularly those interested in temporality and materiality.