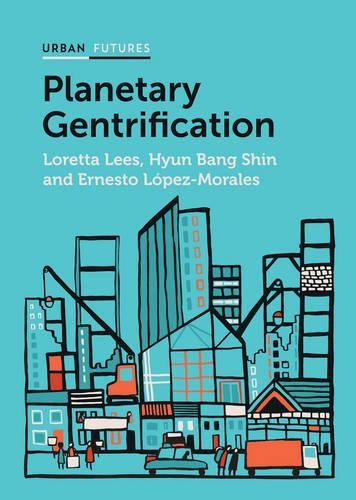 Review by Aysegul Can

This book contains eight parts including an introduction and a conclusion. It offers the reader a collection of important case studies mostly from the Global South that are complimented with significant historical and cultural background and refreshing theoretical debate on processes of gentrification. The firsst part opens with the well-known Ruth Glass quote (p.1) from when she coined the term gentrification and provides an overall introduction to the book. While explaining their approach to tackle the ever-growing issue of gentrification all around the world, authors introduce “new” comparative urbanism. They explain that this is new because (p.3) “it focuses on cities beyond the usual suspects of London, New York etc. and beyond the constructs that have come out of, or been based on, those places”. This book investigates and discusses the hegemony of Euro-American centric gentrification theory, how it travels to rest of the world (or if it travels at all) and how it can be updated with a new set of cities that used to be considered in the periphery of the world. Authors also tackle the somewhat recent criticism or debate in gentrification studies, which is that if gentrification as a theoretical concept has been stretched out or is it true, as late Neil Smith put it, that “gentrification has gone global”. These concerns and debates can give the reader a hint on the name of the book as well, which is cleverly put by authors as “planetary gentrification”.

The following part of the book which is called “New Urbanizations” discusses the urbanization concepts such as back to the city movement that have been used to explain gentrification. There is a thorough discussion on stretching out the term gentrification and how it was confined in a small set of cities from Western Europe and Northern America. Authors explain this skilfully to make their argument for planetary gentrification and how there are practices in the Global South and they have been there for a long time that show the symptoms of gentrification, but were never labelled as such. While discussing the debates that have long occupied gentrification studies, authors make the point that there is no need to confine gentrification in the North or even in a particular part of the city (i.e. inner city). This is followed by the new debates on the economic side of gentrification. This part especially focuses on the new emerging economies of the Global South and six economic aspects to put planetary gentrification in perspective. These aspects include the workings of the global economy and the rise of the real estate sector globally, the resurgence and better use of “rent gap theory”, a new emerging concept called “spatial capital”, which refers to the way public oriented transform projects can transform poor areas or create new spatial opportunities, and the state involvement in the transformation of inner city informal (or once informal) settlements. As the authors put it in the conclusion of this part (p. 82): “….we do claim that the new economics of gentrification explain fundamental questions like the inequalities of land and housing affordability, the essentially neoliberal economic mechanisms of displacement, and the financialization of urban change.”

Fourth part of the book discusses the long debated subjects of class, the rise of “new” middle class and changing consumer preferences that led the “new” middle class to emerge and start gentrifying the inner parts of important cities. The very important thing in this part is that it discusses the middle class in the Global South, how they come about and how they are different to the ones in the North through many examples around the world. This is a very refreshing way to look at the differences of gentrification between the North and the South, and point out how gentrification evolved in terms of actors. As they conclude in this part gentrification is less produced by gentrifiers or their ever-changing desires about the inner city, but more by national and transnational powers such as the state, real estate developers and financial organizations. This section is then followed by a section discussing whether or not gentrification (like a policy exchange) is being copied and adapted around the world, mainly from North to South. The authors discuss in detail regeneration policies such as the Barcelona model or Bilboa effect and conclude that even though these policies do behave like gentrification blueprints, their transfer is not always North to South or East, or city to periphery and they mediate in context, which means they deserve to be analysed in their own rights. Finally authors investigate the kind of policy blueprints such as zero-tolerance policy and mixed communities that always result in gentrification, even if they were not presented that way to the public, and how these policies create long-term problems all around the world.

Sixth part of the book introduces a fairly new term for regeneration projects implemented in informal settlements that result in state-led gentrification, which is “slum gentrification”. The section opens with a debate on the word “slum” and what does it imply for the urban poor living in these areas. Following this, authors make their case with several examples from around the Global South such as Mexico, China, India. This section is important as it sheds light on certain policies that are sometimes considered progressive (i.e. regeneration projects in deteriorated and informal urban areas), but end up in displacement and forced eviction, and how these neighbourhoods are complex entities that require special attention. This is followed by a section on mega-gentrification and displacement. This part discusses the displacement process or as authors put it development-induced displacement (DID) after massive urban development projects. This section works as what happens during “slum gentrification” as these massive developments are usually implemented in “slum” areas in Global South world cities. This kind of displacement produces the most brutal consequences for the vulnerable urban population such as forced evictions with little or no compensation to cover their losses. In this section, authors make the important connection between these processes and territorial stigmatization. The criminizaling and dystopian imagery of these poor inhabitants is an important facilitator to create a societal consensus over these urban development projects.