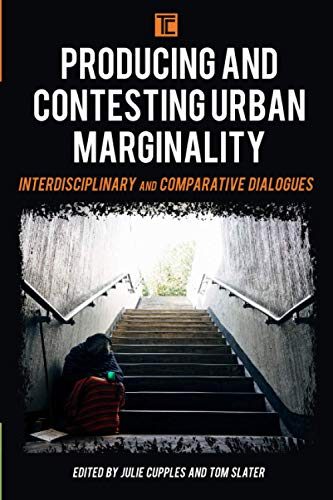 Reviewed by Aysegul Can

This ambitious edited book, which brings together many different authors from all around the world, is the result of a four-day workshop funded by the British Council and held in Mexico in 2016. That workshop included international case studies (mostly from Latin America and the UK) focusing on processes of gentrification, decolonialism, stigma, social inequality, and similar themes. One aim of the book is to show that urban marginality is not the same everywhere in the world, in spite of the increasing global and transnational forces. In line with this, in the introduction, urban marginality and being in the periphery are explained through different perspectives and politics. A second objective for this book is to offer a more refreshing outlook on several important debates between colonial/decolonial/modern/comparative urban studies scholars and political-economy/planetary urbanization urban theorists without focusing too much on theory.

The book is divided into three sections, each consisting of three chapters. The first part of the book is named “Conceptual Terrains” and tackles the theoretical foundations and policies of urban marginalities. Gentrification, informality and comparative urbanism are the three main concepts. Authors try to tackle the process of gentrification and its use in places and localities that are beyond the borders of the Western world. Instead of discarding this concept altogether for the Global South, authors explain that gentrification is still relevant for most of the world and discuss their own interpretation of this concept. However, this discussion on gentrification reads more like a conversation between several urban studies scholars rather than a structured piece of writing. Following this, authors use comparative urbanism as their theoretical framework to delve into processes of informality. This discussion reads as a very knowledgeable piece on informal settlements and slum upgrading policies. Comparative urbanism as a theoretical tool is not very well used and it does not go beyond listing the similarities and differences between cities; however, it reads as a very well written piece on the political and policy oscillations on slum upgrading and how this affected the vulnerable urban population. Finally, informality is also explored through the refugee crisis, the situation of precarity and the constant pressure to exist in the margins of life. This is especially a highly impressive discussion about a “politically, socially and culturally marginalized space” (p. 69).

The second part of this book is called “Everyday Marginalities”, focusing on the urban identity and sense of belonging of people who used to live in stigmatized and marginalized neighborhoods through the everyday practices of music, dance and religion. The emerging discussions of territorial stigma, where it comes from, what happens to people inflicted with such stigma, the pride of stigma (ghetto or hood pride) and urban marginality through social construction of identity via consumption of techno music and rave culture are a refreshing way of looking at social exclusions and segregation in different parts of the world (mostly the UK and Latin America). There are carefully made analyses that focus on rave culture and techno music as a way to investigate and explore urban marginality, because they see this as the dance and music of the disempowered. Finally, in this part, through the study of the religious cult of Santa Muerte, Mexico, the authors emphasize the importance of the study of popular culture to better understand social and urban injustice.

The third and last part of the book is called “Marginality by Design and Designing out Marginality”. This final part mostly examines urban design in marginal parts of several different cities. The emerging themes are heritage and again informality, but this time informality in the form of self-construction. While the debate on the tension between history and heritage and how heritage and the narrative surrounding it can be a romanticized version of history that excludes or erases the history of stigmatized populations is skillfully presented, the connections between different case studies from different places are missing. Comparative urbanism is also an emerging goal in this part as well, as it has been throughout the book. However, this does not go beyond listing several different localities with nothing or little in common. The informality, in this part, is investigated more from an urban design perspective with ways to discuss the tactics of self-construction used by the residents to increase their spatial use. This debate does connect to the wider academic literature on exploring bottom-up and informal approaches without marginalizing them.

The conclusion dives into the tension between urban studies and urban geography, presenting a detailed account of the need to include race, gender and decolonial studies into the planetary urbanization debate that usually explains urban injustice and inequalities in terms of political economy, with significant emphasis on social class. This chapter carefully lays out several ways to integrate these other perspectives and a way forward that would better meet the needs of today’s vulnerable urban population. The book, overall, offers a very rich selection of case studies and perspectives that are mostly from the Global South; however, it fails to have a continuing structure and flow. It has a very ambitious promise of offering a very “refreshing way forward from the tedious and obnoxious theoretical divide through its theoretical pluralism” (p. 13); however, in the end, the book reads as a list of case studies that are bundled together with no or little theoretical connection to each other except from being at the margins of urbanization. Nonetheless, most of the individual chapters on their own offer compelling reads for urban studies scholars and students, and the book proves to be an important work for readers looking to find information on a variety of case studies.