Refugees in new destinations and small cities: resettlement in Vermont by Pablo Bose 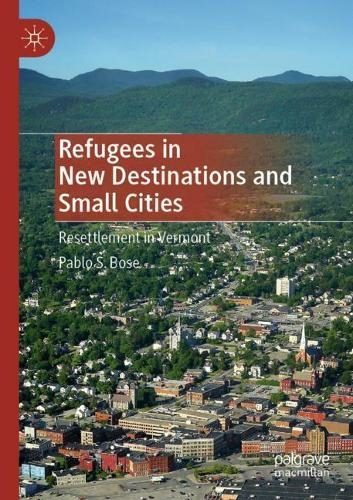 To resettle in third countries like the United States is truly quite extraordinary, and while refugees as a category of migrants receive much attention in the press and academic literature, the reality is that very few refugees resettle in other countries beyond the first countries upon which they set foot. At the end of 2019, according to the latest United Nations High Commissioner for Refugees (UNHCR) estimates, 79 million people were considered refugees or displaced persons. This means that more than 1% of the world’s population was displaced (UNHCR, 2020). Yet, of those 79 million, just 107,800 refugees were admitted by third countries for resettlement during that same year. While the US was once the leading third country of resettlement, averaging about 60,000 admissions per year over the past several decades, in 2019, just 29,916 UN recognized-refugees were admitted to the country. Interestingly, many of these refugees found themselves resettled in familiar gateway cities such as New York City and Chicago. However, increasing numbers found their new homes to be in non-traditional destinations – not only the secondary cities that had become more prominent as refugee resettlement sites in recent years, such as Minneapolis and Atlanta, but also in small and mid-sized towns, often in regions that are much less diverse or accustomed to integrating newcomers.

When Professor Pablo Bose moved to Vermont in 2006, he “wondered what future there would be for me, based as I now was in a sparsely populated state in a town of tens of thousands, not millions, and one that seemed overwhelmingly white and homogenous” (p. 2). As it turns out his university town of Burlington, Vermont (and its surrounding suburbs) was not the place he had imagined it to be, and in fact, “a new diversity of people, culture, and expectations” (p. 2) warranted academic exploration as a non-traditional refugee resettlement site. Ultimately, Refugees in new destinations and small cities: Resettlement in Vermont serves as the culmination of over 15 years of Professor Bose’s community-based research working synergistically with refugees, NGOs, governmental agencies, and other researchers, including his undergraduate students at the University of Vermont. The book drills down to understand the experiences of resettled refugees in a part of the country not typically recognized as a destination for refugees and, as a result, makes a much-needed contribution to the scholarship on this subject, with insights to be garnered across other non-traditional resettlement sites across the US.

There are three sets of central questions in the book: the first is about national trends and local distributions of refugees in Vermont (Chapters 1–3). The second is about the effect of resettlement on receiving communities (Chapters 4–6), and the third is about the impact of resettlement on refugees (7–9). The concluding chapter (Chapter 10) outlines ways forward for research, activism, and policy regarding newcomers in non-traditional immigrant destinations. Throughout the book, Professor Bose demonstrates how refugee integration must be understood through the spatial lens and how much of the process of refugee resettlement is dependent on local context. Through a variety of research techniques and data-gathering tools, Professor Bose provides novel understandings about the role of place in influencing the refugee experience.

The book makes its strongest contribution in the section on the lived experiences of refugees in Vermont. Professor Bose focuses on key issues that participants in his research consider most relevant to their experiences of resettlement in Vermont. These chapters highlight the broad themes of mobility, food, and the life cycle as “contributing factors of multiple conditions of refugee life” (p. 223) including housing, jobs, food security, transportation, farming, hunger, education, political representation, mental well-being, childcare, and eldercare. Clearly, as Professor Bose has demonstrated elsewhere (Bose, 2014), mobility serves as the linchpin that enables refugees enter the job market and find gainful employment, receives necessary health services, and access other useful goods and services, such as language training and vocational instruction, essential to both basic survival and longer-term socio-economic integration in the US. Meanwhile, by exploring the ways refugees attach meaning to and maintain cultural identity through food practices, while also crafting new identities through food, Professor Bose demonstrates how newcomers navigate their new surroundings and create a sense of attachment to particular places (p. 198). Through his careful, considerate, and conscientious participatory research, Professor Bose discovers that when refugees are resettled, both opportunities and challenges emerge, and this leads to the emergence of more nuanced accounts of refugeeness while also having the effect of “individualizing” refugee experiences.

A major strength of Refugees in New Destinations and Small Cities: Resettlement in Vermont relates to local policy implications and the fact that this book will likely have a significant impact beyond academia in terms of providing local knowledge to policymakers regarding impacts on refugees and host communities alike. Professor Bose has a proven record on this kind of activity already, and the results from this book will likely facilitate additional collaborations, as well as provide new opportunities for scientific exchange and policy work. Indeed, the kind of innovative and creative community geography illustrated in this book has the potential for generating better refugee resettlement policy by 1) identifying the multiple and complex ways in which resettlement unfolds from the perspective of refugees themselves, as well as 2) outlining how local destinations work to absorb the influx of newcomers. Ultimately, this book suggests that we need to critically examine the rationale for sending refugees to new locations as well as the resources provided to various stakeholders and the refugees themselves upon arrival.

“Self-sufficiency” lies at the heart of current U.S. refugee policy, and the era of Trumpism has brought 4 years of anti-refugee sentiment and the complete dismantling of the refugee resettlement infrastructure. The resultant interlocking and ensuing violence of racism, patriarchy, and capitalism creates barriers that clearly structure the ways in which refugees experience resettlement. While Professor Bose hints at these dynamics, along with the national and international refugee resettlement regimes, governance structures, and state policies that significantly affect refugee resettlement, it feels like more could be said in the pages of Refugees in New Destinations and Small Cities: Resettlement in Vermont on these matters. Fortunately, readers can examine Professor Bose’s (2020) recent research where he further explores the connections between broader trends of rising anti-immigrant/anti-refugee rhetoric and policies at national and international levels to the ever-changing experiences of refugees in non-traditional U.S. gateways.