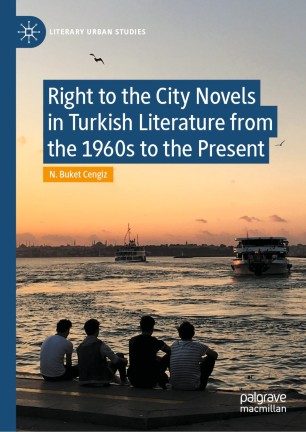 In Right to the City Novels in Turkish Literature from the 1960s to the Present, N. Buket Cengiz employs a literary analysis that engages with Henri Lefebvre's concept of the right to the city in the context of rural to urban migration. Through a comparative approach, Cengiz analyzes migrants’ right to the city across seven novels: The Homesick Birds by Orhan Kemal, Uncle Halo and Two Oxen by Muzaffer Izgü, Berji Kristin: Tales from the Garbage Hills by Latife Tekin, Heavy Roman(i) by Metin Kaçan, On the Periphery by Ayhan Geçgin, It Takes All Kinds by Hatice Meryem, and A Strangeness in My Mind by Orhan Pamuk. The chosen novels are all set in Istanbul, with storylines heavily focused on migrants within the city. The book aims to place the concept of the right to the city as a common “vein” in novels set in Istanbul (11, 13, 227). Cengiz argues that many such novels have been analyzed from the perspective of nostalgic discourse when discussing the changes experienced in and by the city due to migration (10-13). Thus, the right to the city analysis within the book is meant to stand as a counterpoint to understanding such novels from only a nostalgic outlook.

Before analyzing the novels across three chapters, Cengiz provides two chapters worth of theoretical engagement with the concept of the right to the city and also elaborates on Istanbul's migration history. In the timespan covered by the seven novels, Istanbul experienced and facilitated multiple waves of migration, including the expulsion and emigration of non-Muslim minorities, and rural to urban migration into Istanbul, often of Muslim minorities. These prolonged and repeated historical events resulted in permanent structural changes to the city (47). In analyzing migrants’ right to the city, Cengiz puts forward several themes that emerge from the novels. This review discusses the four most prominent themes.

First, the gecekondu or slums, the literal translation being “built overnight” (67), appear as a primary setting in the novels. Within the novels, migrants have conflicting perceptions and experiences of gecekondu. While the gecekondu guarantee a right to housing in an otherwise unaffordable city, some migrants set goals to leave and escape these slum-like areas due to their low quality of housing, poor infrastructure and services, and in some instances, lack of safety, crime, and drugs. Leaving the gecekondu can also be a step in migrants’ claiming their right to the city or becoming more urbanized. Gecekondu are also places of resistance, stability, and permanence for migrants. In the gecekondu, migrants reunite with others from their villages and form communities. Further, while instances of the government's destruction of gecekondu appear in the novels, migrants often rebuild their homes and identify with their gecekondu community, much like many urban residents identify with their neighborhood (102, 121). The novels written in later decades also depict the historical transformation of gecekondu, some of which were converted into permanent low-income apartment buildings (189-190).

A second prominent theme is the process of becoming urban, as the novels unpack the process of urbanization among migrants. A repeated question seems to arise across the novels: What indicates that a rural migrant has become urban? Cengiz skillfully analyzes how the novels explore the tension between migrants who “become urbanites” and those who do not and how this impacts their overall access to and interaction with the city (53, 101, 113, 230). This process of urbanization varies across the novels but can link to material matters such as living outside the gecekondu and adopting urban fashion and consumptions habits. It can also relate to intangible aspects, such as habits, values, gender norms, language, accent, and vocabulary.

The idea of periphery appears as a third theme and deeply links with the theme of becoming urban. While the novel by Geçgin introduces this theme within its title, migrants’ physical and metaphorical periphery is present across all novels. In the physical sense, migrants often live at the city's periphery in less central neighborhoods or neighborhoods ignored by state services, such as the gecekondu. In a more metaphorical understanding, migrants remain on the periphery of urban life or without the right to the city. Despite migrants’ agency, across the novels, the analysis highlights many constraints that keep migrants at the periphery of urban life, such as economic limitations, feelings of strangeness, realities of isolation, and more. Additionally, as many of the migrants in the novels are also minorities, their minority status further places them at a metaphorical periphery.

The final theme is gender, which Cengiz consistently includes across her analysis. Overall, women are understood as active agents and discussed as the “locomotive of migration” (56-61). The women within the novels have their own ideas on how to “become urbanites,” which are often influenced by their interactions with and observations of urban and upper-class women. Some migrant women have greater interaction with the city due to their work, while women who work only within the home remain in the periphery, both physically and metaphorically. The women also find new means of challenging patriarchy in the city, their neighborhoods, and their families.

Overall, Cengiz convinces the reader that the right to the city is a common “vein” across the seven novels and perhaps in other novels set in Istanbul. By tracing the right to the city concept across several decades of literature, Cengiz demonstrates its patterning across time and multiple authors. Further, Cengiz is careful to consider both migrants’ agency, choices, motives, and desires, as well as outside forces, including government policies, state and security actors, economic realities, Turkey's cultural and religious dynamics, gender, and actions of non-migrant Istanbulites. In conclusion, Cengiz's use of literary analysis produces a new perspective not only of the seven novels, but also on questions around migration, right to the city, and Istanbul's urban transformation.