Taking possession: the politics of memory in a St. Louis town house by Heidi Aronson Kolk 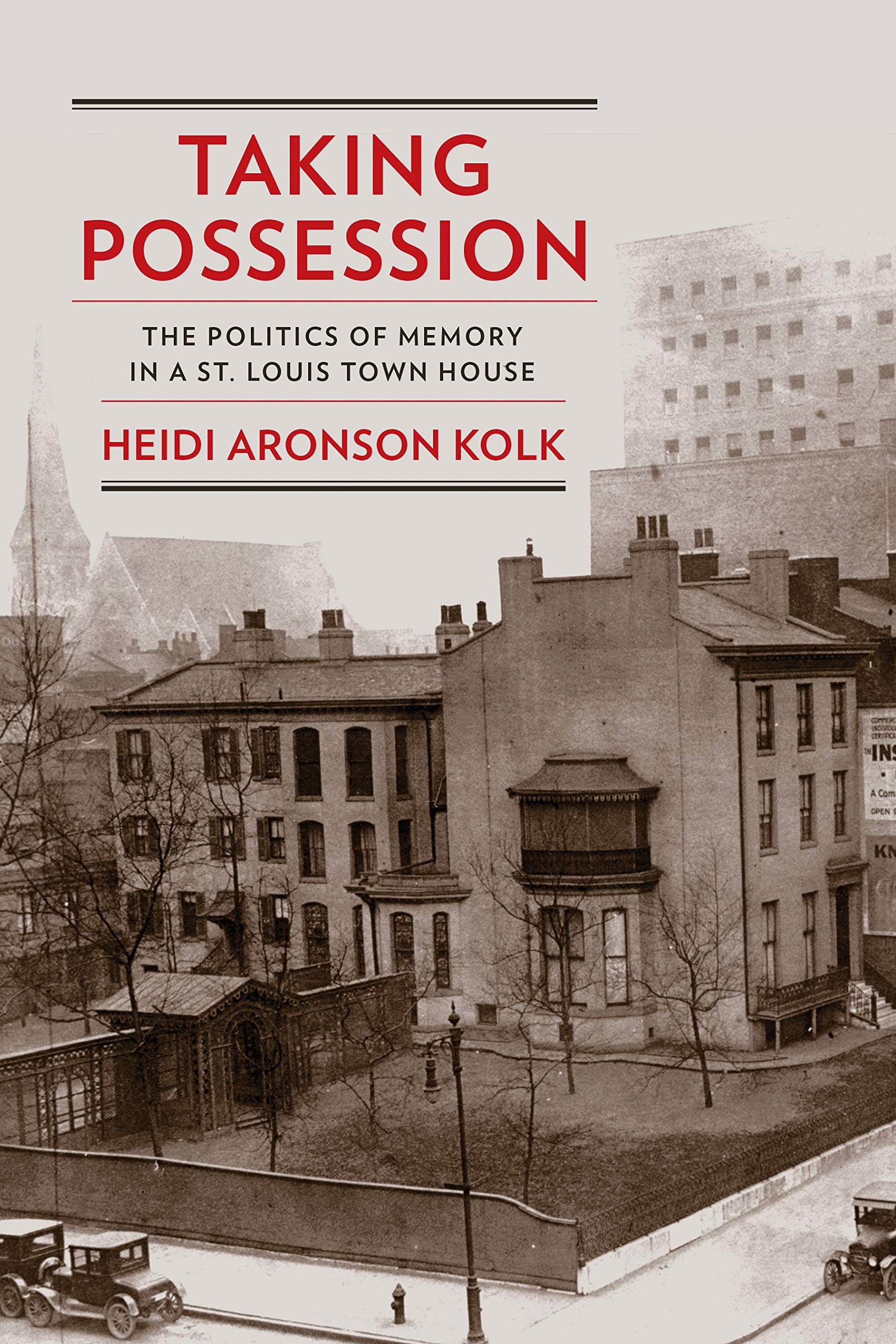 Historic preservation has a well-worn origin story: emerging as a response to urban renewal’s wrecking ball, it catalyzed recognition of the value of “high” architecture and “vernacular” treasures, mobilizing communities around the country to save these places. Like many movements that came to fruition in the 1960s, though, historic preservation has a longer history, one that starts earlier and sometimes has more fraught, less noble intentions. Responses to this threat of loss, this act of saving in the face of imminent destruction, may have always been an overt animating force for preservation, but it has also sometimes come from more base motivations: an effort to manage change, asserting “regimes of place: control over public spaces and their meanings past and present” (Kolk, 4).

Taking Possession tells the story of one effort to save an early Victorian townhouse in what is now downtown St. Louis, somewhat before historic preservation’s heyday. Told almost entirely through the story of the Campbell House, Kolk’s book tracks changing interpretive approaches over time, reflecting not just contemporary attitudes and politics, but also the way that preservation and interpretation efforts at the house have mapped closely on to broader fears, social norms, or the desire to exert control over the built or socio-spatial environment. Though Kolk focuses in on the story of the preservation effort surrounding this one particular historic site, her arguments certainly have resonance for those engaged in the politics and practices of historic preservation more broadly.

The first chapters of the book address the Campbell family history, the context of the surrounding neighborhood, and the effort, during the early part of World War II, to produce a sense of historicity to save the house and its possessions from auction, which represented an unusually intact material record of Victorian life. Part of Lucas Place, an early inner-ring elite suburb of St. Louis, the Campbell House dates to the 1850s and was the home of Robert Campbell, a renowned St. Louis fur trader, and his wife Virginia, who formed part of the city’s elite. By the turn of the century, the neighborhood had been almost wholly subsumed by commercial and industrial growth of a bustling downtown – becoming what Larry Ford has called a space of “dishevelment,” or “loosening” of the urban fabric (Ford, 2000, p. 31).

The second half of the book entails a close archival reading of a series of artifacts, enabling Kolk to detail the changing approach to interpretation (and its connection to prevailing social norms) in the decades after the opening of the Campbell House Museum in the mid-1940s. The family matriarch Virginia Campbell’s receipt book is emblematic of a 1940s housewife’s wartime frugality; a staged dinner party reenactment of a visit from Ulysses S. Grant, thoroughly documented in McCall’s magazine, shows a White, middle-class fantasy of 1950s postwar plentitude; and two buckskin suits ostensibly gifted to Robert during his days as a frontiersman connect to the city’s fur trading past, while its built legacy was being simultaneously dismantled in 1960s urban renewal.

The book’s concluding section deals with one final artifact. In the early 1970s, a photo album of the 1880s Campbell House was unearthed, including incredibly detailed architectural photos of the house and its furnishings. In keeping with the professionalization of historic preservation and the house’s addition, in 1977, to the National Register of Historic Places, the photo album enabled the Campbell House Museum to undertake renovations to restore a material-historically “intactness” to the house, particularly as historic preservation increasingly emphasized the physical “integrity” of structures as central to the legitimacy of historic places.

Here Kolk elevates some of the most important themes of the book: namely, the interconnected nature of caretaking and possession (both “care” and “taking”) and the role of the Campbell House in shoring up the authenticity of a White, elite past in downtown St. Louis. Through the micropolitics of the Campbell House, Kolk illustrates the ways in which acts of care for the house were also motivated by a desire to exert control over broader, uncontrollable forces in urban American life (desegregation, industrialization, and suburbanization, to name a few). Because of what Kolk terms the “memorial unconscious,” she makes it clear that the deepest notions of preservation are often intricately bound up with the destruction wrought by renewal – you need one for the other to have meaning (17).

Kolk nods at, but does not always fully draw the connection between, the larger stakes of such a salvage anthropology approach to the urban built environment (and, by extension, its implications for broader historic preservation practice). Some communities, particularly working-class and communities of color, she makes clear, are disproportionately harmed by the “willful neglect and violative takings” (158) typified by mid-century urban renewal, and St. Louis was no exception. But, while sites like the Campbell House often serve to shore up White, middle-class historical fantasies or notions of who ought to form part of a historical record or narrative, she does not fully explore the ways in which working-class and/or communities of color are rarely served by these compensatory acts of preservation – especially as the material artifacts connected to their history are dismantled, whether from federal urban renewal or, more recently, gentrification.

While the book is laudably rooted in the archival resources associated with the Campbell House, for readers less familiar with the urban history of St. Louis or historic preservation, the book does not always offer broader connections to the larger national trends that underpin the story. For instance, how did the changing approach to interpretation align with phases of urban change in St. Louis in the second half of the century, such as the demographic shifts associated with the racialized suburbanization that drove practices of urban renewal, and whose ensuing patterns of racial segregation continue to this day? Similarly, while Kolk remarks upon the sense of “disjointedness” that visitors have described, throughout the museum’s history, when stepping from the streets of downtown St. Louis into a pristine Victorian environment, I would have been curious to know more about the 20th-century layers of the surrounding neighborhood, which would presumably include the Black, labor, and urban history that have not been fully recognized inside the museum’s walls.

The central claim of the book – that saving and possession are just the other side of the coin from loss and taking, and that the act of preservation is often an effort, at root, to exert a new narrative of control over a place – is an important one for more than just historic house museums. This is a theme that plays out at the level of the neighborhood and at the scale of the city. One of Kolk’s important contributions is to localize this effort, and to draw attention to the ways in which preservation might inadvertently seek to create outposts of control to shore up these broader place narratives.