The One-Way Street of Integegration by Edward G. Goetz 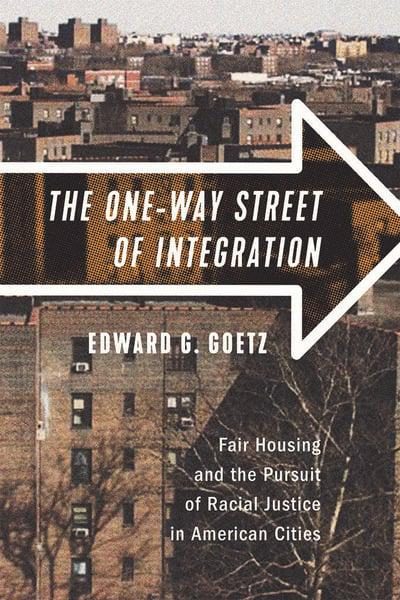 In the urbanized areas of United States, extreme racial inequality – appearing in starkly spatialized forms – endures as a striking symptom of centuries of racialized subjugation. For at least the last seven decades, the dominant, even hegemonic, response to this iniquity has been a call for racial integration, something hailed as sacrosanct by nearly all good American liberals. In this provocative, engaging – and brave – new book, Ed Goetz dares to challenges this hegemony in way that is both forceful and unapologetic – and, ultimately, compelling.

Goetz aptly takes his title from Stokely Carmichael, who in a sagacious 1966 quote prophesized that, until there was real power for black people and black communities, integration would remain a “one-way street” (where all the burden is placed on black people who must relocate to white areas or attend white schools). Most pernicious, as Goetz’s book powerfully underscores, is how this“one-way street” in Carmichael’s words“reinforces, among both black and white, the idea that ‘white’ is automatically better and ‘black’ is by definition inferior” (p. vii). It is this malignant manifestation of American white supremacy that Goetz aspires to extirpate.

What has impelled an otherwise temperate social scientist like Goetz to write such a passionate – and, at times, almost truculent – book (albeit one that is well reasoned, systematic, and carefully presented)? The answer is found in the profound indignation he feels toward much of the advocacy for “fair housing.” As Goetz astutely understands, many of the policy actions tendentiously promoted by these “fair housers” greatly exacerbate the suffering of America’s most vulnerable racial minorities. And Goetz – in his two-fisted fight for racial justice – is having none of it.

“Fair housing” (originally known as “open housing”) is a term of art in American housing studies – connoting the principle that housing should be allocated on a “fair” (or “open”) basis, absent (especially racial) discrimination. Its key codification is the 1968 Fair Housing Act. As Goetz clearly explains, much of fair housing advocacy has no inherent spatial dimension, and instead is straightforwardly about ensuring the equal (nondiscriminatory) access to housing for all. What troubles Goetz, however, is the ardent single-minded pursuit of an agenda of racial integration by most fair housers. This agenda, in contrast, does have a strong spatial component demanding the massive reordering of current settlement patterns.

At the core of Goetz’s argument is the contention that these spatial strategies have grown more aggressive (and injurious) over time. Explicating this argument with great clarity, Goetz’s usefully identifies three “stations” of fair housing spatial advocacy. The first, dating to 1940s and continuing today, seeks merely to open up exclusionary communities (usually predominantly white suburbs) to nonwhite families. Goetz generally supports these efforts, which include building subsidized housing in wealthy suburbs and limiting exclusionary zoning. Problems, however, arise with the two other latter stations – preventing further segregation and dismantling existing communities of color.

While sounding benign, and even laudable, fair housers’ efforts to prevent further segregation notably include prohibiting additional affordable housing in poor black communities. This integration strategy is, for Goetz, a source of great distress. In his view it sacrifices extremely vulnerable people’s basic needs on the altar of (someone else’s) conception of an ideal settlement pattern. As such, it greatly burdens the very people it is designed to help. It also sets up a major conflict with those dedicated poverty warriors striving – usually against great odds – to improve the living conditions in poor urban neighborhoods. Goetz is especially incensed that some fair housers cast these often-tireless advocates of community development as a key source of the problem, rather than as a major part of its amelioration.

The third station of fair housing spatial advocacy, the actual dismantling of poor communities of color (such as the demolition of public housing and the forced displacement of residents under the HOPE VI program), is the most interventionist. It is also, as Goetz perceptively demonstrated in his last book, New Deal Ruins, the most brutal. And it, too, exacerbates the conflict between community developers seeking to preserve affordable housing where it is needed most, and fair housers, who see most (project-based) public housing as a legacy and perpetuator of racial segregation and exclusion.

Much of the book is framed around this conflict, and debate, with Goetz presenting a vigorous argument in favor of the community development/affordable housing position visà-vis the fair housers/integrationists. Along the way, he provides a succinct yet thorough account of both the long history of this debate (first gaining salience over a half century ago), as well its more contemporary – and ongoing – expressions.

If, pace die-hard liberal fair housers, mass integration is not the path to the racial justice Goetz so admirably and effectively champions, what, then, is? His answer to this biggest of questions is – in a word – power. At a major crescendo in his argument, Goetz contends that at the theoretical and practical core of the community development movement he robustly defends lies a desire to achieve what the sociologist Mary Patillo calls “‘the real stuff of equality.’” What this means, he explains, is “greater political and economic power for people of color, the kind of power that produces and maintains good schools and safe communities wherever they are located, and provides economic security to residents.” More generally, “it also means the pursuit of decent living conditions independent of the number of white people living nearby” (p. 61)

So, for Goetz, power is key – key to the achievement of the kind of real equality that racial justice demands. On this score, I am certain he is correct. Yet, for a book that has power as its most fundament answer, it is surprising – and lamentable – that any serious analysis of it remains wholly absent. What, for example, might this power look like? How might it be built and maintained? And, most critically, what is to be done once it is achieved and consolidated? Goetz briefly mentions the need to focus on “issues of urban and regional political economy” (p. 15), to engage “issues of regional and racial equity” (p. 149), and, crucially, for the community development movement to be (re)-politicized (passim). But, in the end, very little is said about politics and political power. In this sense, the book will leave some enthusiastic devourers of its content – me most certainly among them – craving another, final chapter that points to some directions we need go.

Despite this omission, Goetz has written an important and timely book, perhaps needless to say. Beyond its substantial contribution to the scholarly literature on American urban policy, infinitely more important is its potential to aid in the ongoing struggle against racial injustice and American white supremacy – something needed now perhaps more than ever.