The Origins of the Dual City: Housing, Race, and Redevelopment in twentieth century Chicago by Joel Rast 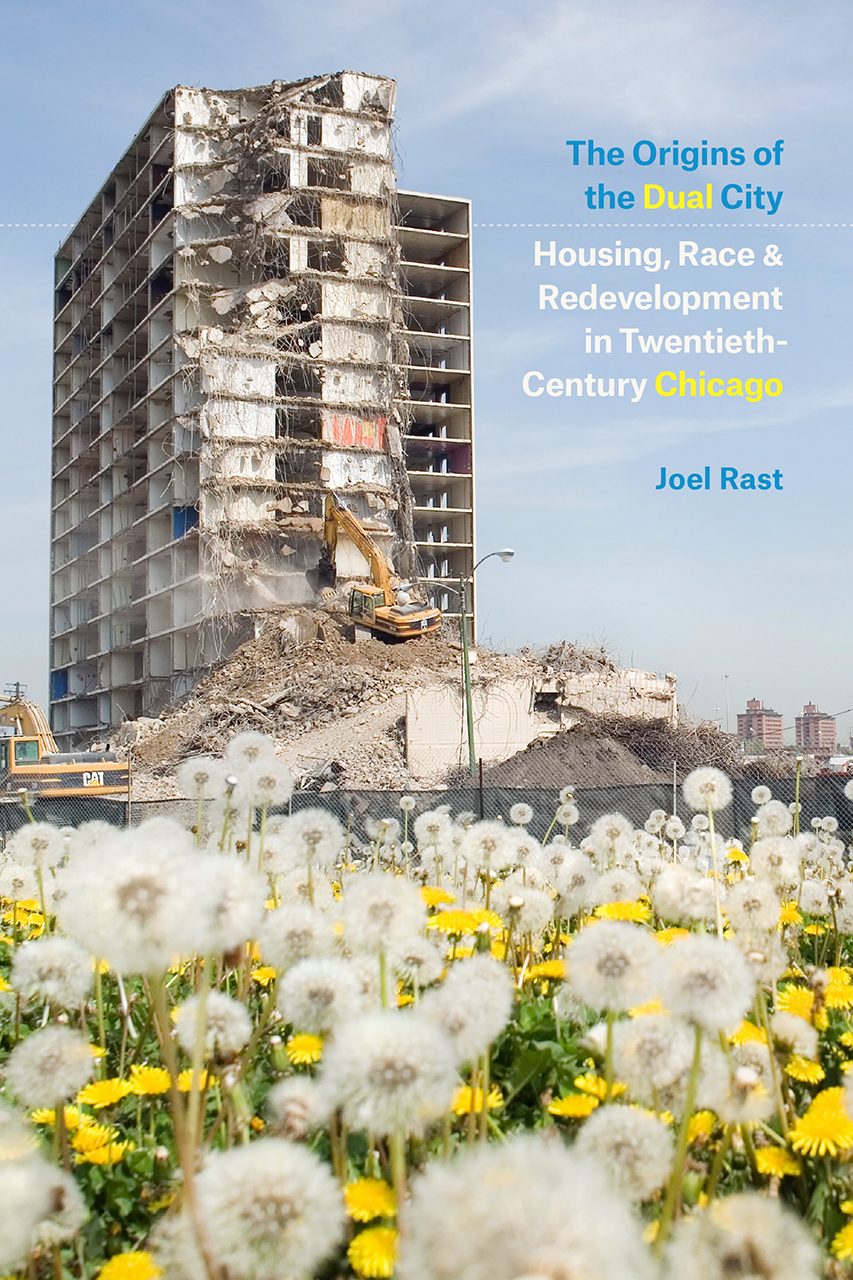 In The Origins of the Dual City, Joel Rast argues that the manner in which urban revitalization policies unfold can be explained against the backdrop of society’s dominant paradigms. By focusing on paradigms, Rast explains how the worldview of policy actors shapes and constrains the development of public programs and their implementation. This is in contrast to social scientists who examine the urban revitalization policy process drawing from a materialist-orientation or an urban regime framework. The consideration of paradigms is important because it explains how dominant views of the world and its institutions set policy parameters while remaining relatively invisible and unquestioned. At the same time, Rast explains how paradigms are shaped and rearticulated in response to efforts to implement policies and adapt institutional arrangements that impede their stated goals. This framework helps to explain the durability of broad policy parameters, despite decades of middling implementation.

Rast’s analysis focuses on a detailed case study of urban revitalization policy in Chicago during the twentieth century. Three dominant paradigms are examined, privatism, public–private partnerships, and the dual city. Each is argued to manifest itself during key eras of Chicago’s urban revitalization history. The first paradigm, privatism, was dominant in Chicago leading up to the Great Depression. Under this construct, the guiding principle of urban revitalization was to use the government regulatory process to temper the free market and eradicate the slums. The second paradigm, public–private partnerships, emerged in response to the shortcomings of policy implementation guised by privatism. Under this construct, government took a more active role in revitalization and used its eminent domain powers and other resources to subsidize and bolster private activities. Public–private partnerships guided a litany of programs beginning with urban renewal. The era of public–private partnerships focused on clearing the slums and rebuilding the urban core. Finally, Rast describes how the dual city paradigm emerged after decades of policies being guided by public–private partnerships fell short of achieving their secondary goals of promoting racial equality and integration. In essence, the dual city paradigm represented a philosophical retreat from loftier goals of previous paradigms. Both the paradigms of privatism and public–private partnerships articulated goals of eradicating slums as a means to promoting racial and economic integration. The dual city paradigm represented a break from these goals and an acquiescence to intractable segregation and poverty in contemporary cities. Rast illuminates these three paradigms through a meticulous historical analysis of Chicago’s urban revitalization policies. Through this analysis the manner in which policy implementation is shaped and constrained by bureaucratic and institutional shortcomings is described. Rast explains how paradigms are not static. Instead, they are adjusted through an iterative process of policy implementation, institution building, and political agency.

After describing Chicago’s experience with the privatism paradigm, the substance of the book focuses on the era of public–private partnerships. This era saw its heyday from the late-1950 s to the early-1980 s. The discussion of public–private partnerships is unpacked in chapters 3 through 7. Given that most of the chapters focus on this period, the book could have been more appropriately titled, “the rise and fall of public–private partnerships in Chicago,” since this is the core focus of the analysis. For all intents and purposes, the dual city paradigm is not interrogated until chapter 8, the final substantive chapter of the book. The book is superlative in tracing how urban revitalization policies went from attempting to eradicate the slums and integrate urban America, to being morally empty with respect to pernicious racial and spatial inequality. Then abruptly, chapter 8 turns to a discussion of the dual city paradigm. This chapter is somewhat rushed and unfulfilling when balanced against the more comprehensive treatment of the public–private partnership paradigm. The examination of the dual city is confined to a single chapter of the book and further diluted with scant references to the neoliberal paradigm.

Despite the relatively underwhelming treatment of the dual city paradigm, the overall message of the book is clear. Dominant paradigms form the backdrop of urban agenda setting and policy implementation. Although they are reformulated in response to policy implementation and institution building, there is a high degree of continuity in outcomes. Throughout the twentieth-century Chicago’s slums remained racially segregated, unequal, and intact as downtown revitalization progressed. Revitalization remained focused on creating an urban core predominantly inhabited by the white middle-class and professional workers who formed the backbone of the post-industrial economy. Simultaneously, African Americans and the poor remained confined to the periphery where the slums of the early 1900s and the landscape of inequality was reproduced. These outcomes were the outgrowth of paradigms that framed and constrained public policy. The succession of paradigms went from privatism, to public–private partnerships, to the dual city (and its companion the neoliberal paradigm).

Rast lays out how paradigm shifts unfolded in Chicago and makes a convincing argument for the generalizability of this model to other cities. It is disconcerting that although paradigms change, there is continuity in their thrust. With each paradigm shift, policy parameters have remained stable with respect to a market-based approach to urban revitalization where government is confined to a regulatory and supportive role. Rast’s central point is that there has been continuity across eras of urban revitalization. The dominant and overarching paradigm, the capitalist paradigm, has been reconstituted under a variety of names (i.e. privatism, public–private partnerships, the dual city, neoliberalism) producing a high degree of continuity in public policy parameters. Embedded in a set of ill-fit institutional arrangements leading to underwhelming policy implementation, the overarching capitalist paradigm has been resilient.