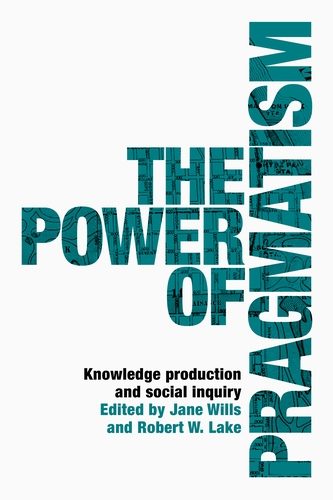 "Experience, in this approach, is understood as the active mediation between ideas and outcomes, potentially prompting people to change their ideas when, faced with the provocations of life, they have to inquire into new ways of thinking and acting". Jane Wills and Robert Lake, 2020, p. 11.

Jane Wills and Robert Lake have curated a set of original and diverse manuscripts in their edited volume, The Power of Pragmatism: Knowledge production and social inquiry, offering multiple entry points to consider the ways in which a pragmatist orientation toward social inquiry can produce social value. The volume provides an introduction to some key pragmatist thinkers including C.S. Pierce, Jane Addams, George Herbert Mead, and John Dewey, explores what a pragmatist approach means for those of us in the academy, illustrates its application in social-ecological, planning and development domains, and concludes with two thought-provoking essays by Robert Lake and Clive Barnett on the possibilities and problematics surrounding pragmatist-oriented approaches for the conduct of research.

Drawing upon John Dewey and others, Wills and Lake lay out what is at stake when considering different approaches toward social science:

“Adopting pragmatism, however, involves major changes in the practice of social science, with significant implications for the ontological status and substantive content of the knowledge produced, as well as for our academic subjectivity and public identity as ‘researchers’.”. (p. 6)

Working through several aspects of this project, their introduction sets the stage for the chapters that follow by delineating a range of core issues and commitments to guide academics and their participation in the world.

The mediation between ideas and outcomes through social-ecological experiences, for Dewey, engendered the possibility (if not inevitability) of individuals and groups interactively creating new knowledge and attendant selves (Jane Wills and Robert Lake, introduction). In other words, Dewey’s pragmatism provides a way to think about potentialities both in terms of individuals adapting to the contexts in which they operate and as communities who may stimulate democratic transformations in key institutions that shape social life. Many chapters in The Power of Pragmatism develop this theme by way of working with Dewey’s concept of habit.

Malcolm Cutchin (chapter 2) foregrounds how Dewey’s concept of habit (socio-environmentally shaped dispositions of individuals and by extension “communities”) is both durable yet actively produced in everyday life through transactions with one’s environment. Crispian Fuller (chapter 4) echoes this theme, drawing upon Mead and James to make the point that intersubjective relations shape individual subjectivities. Gary Bridge (chapter 3) notes that there is a “transactional thickness” to space, or situations in which actors act can be characterized by Deweyan habits – extensive and enduring ways of responding to space. And Trevor Barnes (chapter 5) provides an example of the disruption and transformation of habit in how geographer Bill Bunge, with residents in Fitzgerald (Detroit), initiated what is now referred to as critical cartography by transforming maps from Euclidean representations of absolute space into political representations as esthetic devices to portray social spaces of the neighborhood revealing inequalities and oppression. Taken together, these contributions elaborate on how habit is both a thing and a process of becoming whether that be as an analytic for inquiry or for the inquirer.

Intimately associated with habit is the modality in which it may grow into something in a state of being open to reflection. As Wills and Lake (introduction) note, pragmatism views individual and community identity as an achievement through collective processes under the umbrella of a community-based rootedness. Virtually all of the authors in The Power of Pragmatism laud community not only as a modality for conducting inquiry but also as being isomorphic to democracy.

While space does not permit an extended discussion, two considerations emerge for those who are committed to pragmatist oriented social inquiry. First, as David Harvey (2001, p. 192) notes, community must be “viewed as a process of coming together not as a thing. It is therefore important to understand the processes that produce, sustain and dissolve the contingent patterns of solidarity that lie at the basis of this ‘thing’ we call ‘a community.’” As Harney and Wills report in the case of the E14 expedition, community as a thing pivoted at times on ethno-class distinctions, with at least one resident stating that she did not think the influx of the Bangladeshi population to the area was positive. It is useful both to acknowledge these types of cleavages but also to consider if there is a politics that might transcend current habit and foster democratic and anti-racist collective action. In other words, just because the constitution of people who reside in a locality shifts over time does not necessarily have to result in ethno-class distinctions that reproduce racism, chauvinism, and exclusion. Likewise, it seems that if pragmatism seeks to engender “the imaginative ability to see people as fellow sufferers” (Harney and Wills, p. 188), then seeking to reveal the ways in which the time-space of precarious life is unevenly distributed would be a useful tactic to open up further deliberations around community-based responses to social-ecological issues. Holden (chapter 10) pushes this idea further by taking seriously non-human actants that form ecologies in which humans inhabit and act, situating “[love] as a creative, collaborative, ecological force” (p. 224). This is a beautiful and courageous sentiment about us that could constitute community as a thing and as a process. This does not dissolve the very material, political, and epistemological axes upon which certain individuals and groups are subjectified by other “community” members as not fully human in the sense of equals. Rather, it clarifies, in ways reinforced by many of the authors in The Power of Pragmatism that both social inquiry and the practice of community itself are always in a state of becoming. For academics who engage as participants in the world as part of their practice, The Power of Pragmatism offers useful insights around community, social action, and the environment in a way that demonstrates the social value of social research.

The Power of Pragmatism persuasively contends that learning through experiences and transactions in place holds the possibility of transforming individual and group habit, thereby offering the possibility of performing and aspiring toward forms of community based upon deeper connections, negotiations, and working with purported differences.

Examining a case of community mobilizing to contest a neighborhood school closing in New Orleans after Katrina, Alice Huff (chapter 8) offers an important rejoinder to perspectives emanating from a purely agonistic or consensus-based approach by drawing on pragmatist-oriented collective inquiry based on experimentation and fallibilism. While, as Huff points out, “our work as researchers is not to hold initiatives to a pre-determined standard for ‘properly political’ behaviour” (p. 168), examining the ways in which participants in a situation understand their work and make decisions can be patterned to provide practical and transferable lessons that transcend context and the specificity of the situation. Lake (chapter 14) reiterates this point in the book’s conclusion: “The lure of progress through knowledge is seductive, producing not certainty (an ultimately impossible standard to attain in any event) but, rat her, the feeling of certainty as a reassuring antidote to doubt” (p. 269).

The Power of Pragmatism provides a range of considerations and case studies that will be useful for those of us who want to be in the world we write about as opposed to being practitioners of what Dewey dismissed as the spectator theory of knowledge. An additional benefit of coauthoring accounts of community-based initiatives with those who are not situated as academics is that it prompts us to reflect on the value we can bring to a situation and when we need to change our habits as well. As Wills and Lake’s curation of writers on pragmatism concretely demonstrates, this endeavor must be approached with an eye for potential and a humility to write in ways that do not produce representations of certainty, but rather stems from an engagement with others to support democratic experimentation even when it produces mixed or uncertain results.

Toward that end, it seems appropriate to close with Clive Barnett’s (chapter 15) rejoinder that perhaps “it is a matter of slowing down and thinking about how criteria work” (p. 277), particularly in light of pragmatism’s stated commitment “to the pluralism of human activities” (p. 280). For this reviewer, a slow reading of The Power of Pragmatism is sure to provide a thoughtful opening to reflective academic engagement with the world. A deeper engagement on the part of geographers with pragmatism, as this volume demonstrates, will provide us with potentially fruitful paths not only for the conduct of our academic work but also for how we experience the value of our interventions.