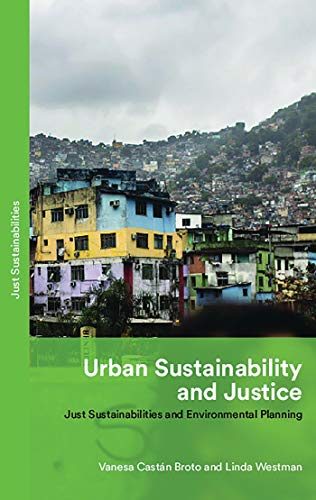 Critiques to the concept of sustainability have grown in parallel with the concept’s popularity. As sustainability has permeated mainstream environmental discourses, critical scholars have decried its loss of transformative potential (Blythe et al., 2018; Elgert, 2010; Lélé, 1991). In the urban realm, this is illustrated by a surge of sustainability initiatives that tackle environmental issues but fail to engage with the related structural inequalities that affect urban dwellers’ access to natural resources, urban services and decision-making realms (Caprotti, 2014; Joss et al., 2013). Should the concept of sustainability be abandoned altogether by those activists and scholars who envision urban transformation as an emancipatory process to promote social justice alongside environmental health? That is the question this book sets to answer. Applying the framework of Just Sustainabilities (Agyeman et al., 2003) to the urban realm, Castán Broto and Westman present a strong case for re-appropriating the sustainability discourse as a means to advance social and environmental justice in contemporary cities. Adopting a feminist perspective allows the authors to decolonialize the sustainability concept by valuing the situated knowledge of diverse urban dwellers that is built from their experiences of the city.

The first half of the book discusses the appropriation of sustainability thought and the potential to re-appropriate the discourse as a tool of emancipation. It starts with a diagnostic: many local sustainability initiatives (whether they are led by governments, civil society or the private sector) are shaped by mainstream perspectives on sustainability which reproduce environmental injustices (one example is that of luxury, exclusionary “eco” communities that do little to enhance the life of the urban poor). This example illustrates a broader discussion of the appropriation of sustainability by mainstream discourses characterized by a trust in economic growth and technological fixes, and the depoliticization of environmental issues (Chapter 2). In Chapter 3, Castán Broto and Westman demonstrate how universal knowledge and ideas about sustainability have reinforced existing structures of oppression at the local level. To address these structural inequalities, it is crucial to pay more attention to the diverse experiences of urban dwellers and the value of their situated knowledge to design solutions that work for the inhabitants of diverse neighborhoods and cities. Chapter 4 explores the failure of existing environmental planning tools to address injustices and proposes ways forward for planning systems to build upon situated knowledge and plural political concerns of urban dwellers.

The second half of the book (Chapter 5 to 8) describes the four principles of just sustainabilities: improving people’s quality of life and wellbeing; meeting the needs of both present and future generations; ensuring justice and equity in terms of recognition, process, procedure and outcome; and addressing ecosystem limits. A transversal theme in these chapters is the value of plurality, both in terms of plural visions of wellbeing and what is a life worth living, and how to incorporate these visions in just decision-making processes.

The book analyzes a rich database of 400 sustainability initiatives in 225 cities across the world. The authors identify the role of urban dwellers as active participants in sustainability initiatives through the co-production of knowledge and co-management of projects as the commonality among the few initiatives that succeed in addressing the four principles of just sustainabilities, suggesting that co-production can be a way forward to empowerment and transformation. Still, mainstream approaches to environmental interventions (those with little concern for justice) remain the norm in the initiatives analyzed in the book. The authors regret that more radical approaches, such as ones incorporating epistemologies of the South, remain unexplored in sustainability initiatives. This may strike an interrogation for the reader: are radical approaches based on alternative epistemologies still to be invented and developed, or do they exist but fail to be captured in the authors’ database? Documented examples of activist and academic environmentalism rooted in alternative epistemologies (Hunt, 2019; Kothari et al., 2019) point to the second possibility. Indeed, as the database collects initiatives that explicitly focus on sustainability, it may overlook radical initiatives for socio-environmental transformations that do not label themselves as “sustainable”. This is a crucial question emerging from this book: Castán Broto and Westman argue that it is crucial to re-appropriate the sustainability discourse as it is the discourse used by the economic and political elite – therefore, it is an entry point to reaffirm the importance of social justice in mainstream environmental action. However, how can we re-appropriate this mainstream discourse while still being in dialogue with those working with alternative ontologies and epistemologies?

Castán Broto and Westman conclude that just sustainabilities is a framework that does not claim to be universalist. It is open to contestation, transformation, and co-creation on the ground (Chapter 9). Indeed, the authors never provide definitions of sustainability and justice, which are left open to interpretation. While this may feel disconcerting to the reader at first, it soon becomes clear that this approach allows the necessary flexibility for urban dwellers to appropriate the just sustainabilities framework to address their own aspirations. Thus, by proposing just sustainabilities as a “compass to deliver sustainability and justice” (p. 223) rather than as a ready-made book of recipes to be universally applied, the authors affirm the transformative potential of the just sustainabilities framework. In addition, the writing style of the book, that illustrates theoretical arguments using varied examples from the database as well as the authors’ own professional and personal experiences and works of fictions, does not only make for a lively read – it also embodies a feminist approach that values reflexive and situated knowledge. A thought-provoking piece on the political dimensions of sustainability discourse, Castán Broto and Westman’s book is an essential reference for scholars and activists interested in urban transformations that matter for people and nature.