Waste is Information by Dietmar Offenhuber 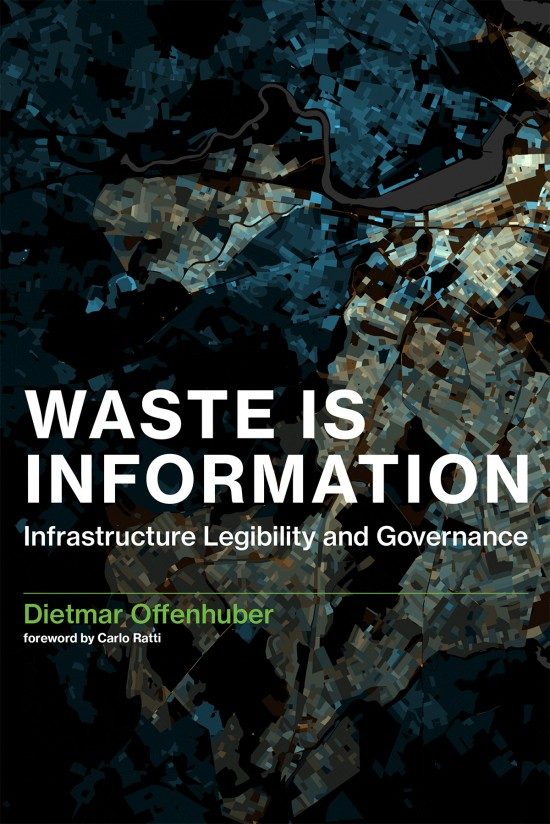 In this well-researched and wide-ranging text, Offenhuber blends theory and empirics to argue that as urban design is a form of governance (Offenhuber, 2017, p. 11), it should increasingly be handled through an “accountability-oriented” approach (Offenhuber, 2017, p. 219). Structurally, the book is broken into three sections each consisting of a case study book-ended by theoretical and historical examinations of over-arching themes. The case studies represent three approaches to understanding waste systems as they actually exist – by using sensor technologies for tracking, by studying local actors, and by analyzing already existing data sources (Offenhuber, 2017, p. 17). Thematically, the sections engage with issues of legibility, informality, and participation and the book concludes by tying these themes together in an argument for “accountability-oriented design.” Offenhuber has produced an engaging text that takes a relatively invisible aspect of modern urban systems (waste infrastructure) and uses it to make arguments concerning the limits of data analysis and the need for responsible governance at all stages of our increasingly mediated lives.

The first section first defines infrastructure, drawing on scholars such as Graham and Marvin (2001), Bowker and Leigh Starr (1999), and Latour (1999), before turning to an examination of the concept of legibility through the juxtaposed lenses of Scott (1999) and Lynch (1960). Offenhuber contrasts Lynch’s ‘bottom up’ approach to legibility as emerging through the daily practices of citizens with Scott’s ‘top down’ analysis of the goals and structures of the modern state producing a tension which he weaves through the rest of the book. The empirical case study for this section of the book is the Trash Talk program conducted in Seattle during 2009 and 2010. This program has been well discussed elsewhere and the author notes that this section of the book overlaps somewhat extensively with the previously published Offenhuber et al. (2012).

The second section describes a study of waste picker collectives in São Paolo and Recife, Brazil, focusing on the informal (and formal) networks, spatial strategies, and data systems they made use of to interact with the governments, agencies, and citizens of their communities. Much like the contrast between Scott and Lynch highlighted in the previous section, here Offenhuber draws a contrast between the Trash Tracker program and its use of new urban sensors and the Forager project which “represents smaller, artisanal approaches to data collection that are concerned with the local scale and tailored for a particular group of users” (Offenhuber, 2017, p. 99). The motives and social systems used by these trash pickers are used to highlight the social life of waste as it is valorized in varying ways and with varying degrees of formalization with respect to pickers, citizens, and local governments.

Noting that top down and bottom up metaphors are evocative, but can at times obscure the very real complexities of socio-technical systems, in the third section Offenhuber asks who participates in infrastructure, what are the limits of that participation, and how is that participation held accountable. Throughout the work, attention is drawn consistently to the limits of quantification and the very real social and political nature of seemingly technical systems; in the final section, these concerns reemerge as a discussion of the politics of interface design and the ability for design to enable and constrain certain types of actions and knowledges (Offenhuber, 2017, p. 197). Using two Boston-based applications for citizens to report on urban infrastructure, the privately run See ClickFix and the public CitizensConnect, Offenhuber deftly highlights how the data ontologies of said systems can encourage certain types of urban citizenry while eliding others from consideration. This is a theme that continues into the conclusion where a discussion on the types and limits of participation ties together the various examples throughout the book and makes an argument for the necessity of “accountability-oriented design” (Offenhuber, 2017, p. 218).

While the text is well organized, researched, and presented, coming from the disciplinary field of geography, I was struck by how much potential overlap exists between Offenhuber’s work here and the field of Critical GIS. Sieber and Johnson (2015) work on civic open data and Jung and Anderson (2017) work on the visualization of spatial inequality are just two of many examples that spring to mind that could further conversations around new technologies, spatial visualizations, and the limits of algorithms and data within urban environments. This book will be of use to individuals interested in those themes and I look forward to work that might emerge with further conversations between this strand of urban studies and critical GIS scholarship.